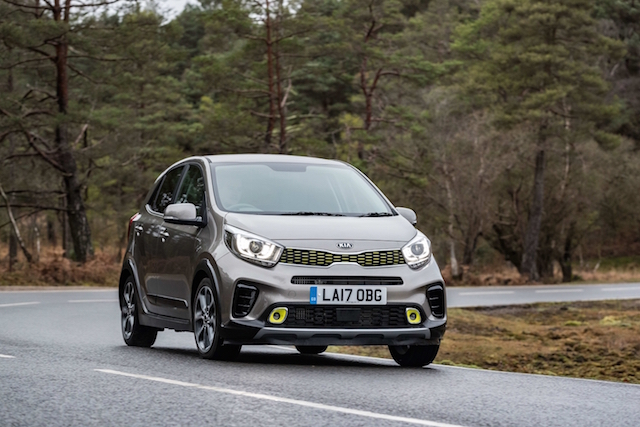 Kia has added an X-Line trim to the line-up of its popular Picanto, stretching the city car's appeal to crossover buyers. AOL Cars gets behind the wheel to see if it's added any additional style, or if you would be better off with the standard car.

The Kia Picanto has risen from bland beginnings to being one of the best city cars on the market as the South Korean manufacturer has proven itself it to be a genuine mainstream car brand that's as good as the best.

The latest Picanto hit UK showrooms in 2017 based on a new platform, with improved driver aids and infotainment, bringing the range more in-line with kit now fitted to rivals.

It's also more practical than the last model, although it's worth remembering the Picanto is still a city car so you can't expect SUV levels of space.

Kia has now added a rugged-looking X-Line trim to the Picanto range to stretch its appeal further.

You only need to have a look on the roads to notice the influx of crossovers. Manufacturers are churning them out at an alarming rate – just look at Kia, for example, which now has nearly half of its UK model line-up as crossovers or SUVs.

The market is now booming to such an extent that manufacturers are now looking at their existing cars to create crossover-style trim levels of. Dacia has done it with its Sandero, Ford with its Ka+ and Fiesta and Vauxhall with its Viva. While the idea of a jacked-up city car or supermini is nothing new, it's the sheer number now available that shows the importance of the market.

Kia has now jumped on the bandwagon with a plastic-clad X-Line version of its Picanto. It features chunky and rugged-looking styling, as well as a lengthy standard equipment list (for the price), which includes a seven-inch infotainment display, faux leather upholstery and autonomous emergency braking, to name a few.

The Picanto X-Line is only available with a 1.25-litre petrol engine, which produces 83bhp and 122Nm of torque – a lower-powered 1.0-litre engine is available on lesser specs. You can have it paired with either a five-speed manual transmission or a four-speed automatic gearbox – the latter taking a lengthy 1.6 seconds more to hit 60mph than the manual.

It's fantastically nippy around town, and is able to get from 0-60mph in 11.6 seconds and onto a top speed of 107mph.

Away from the city the Picanto does struggle slightly, although it's still impressive that it can sit at motorway speeds below 3000rpm and not feel like it's being completely thrashed. It's not designed for motorways and national speed limit A roads, though, so it's worth looking elsewhere if that's what your driving largely consists of.

As for running costs, Kia claims the Picanto X-Line will manage 61.4mpg and 106g/km on the combined cycle. Unfortunately, on a mix of driving we failed to get anywhere near these figures.

The Picanto X-Line is just one of those cars that gives you that clichéd feel-good factor.

It's ideal around town, with a tight turning circle and light steering being a huge help on narrow streets and when parking. Our car also came with an optional parking camera making this even simpler.

It's not exactly fast but it's surprisingly enjoyable to drive as it handles well with minimal body roll, and is good fun to throw into corners with confidence that you won't end up in a hedge around the other side.

While it's not well-suited for national speed limit roads, it performs perfectly fine if you do need to make the odd journey on them. At high speeds it does feel like the engine is being overly-revved and the 16-inch alloy wheels create a lot of tyre noise at speed – a problem we've found in other Kias, too.

The larger alloys also don't ride as comfortably as other trim levels fitted with smaller alloy wheels. If ride comfort is your main priority, a high-spec '3' grade car is probably a better option because of its 15-inch wheels.

Here is where the X-Line is noticeably different to the standard Picanto, as Kia has added some rugged flair to its humble city car.

As well as the plastic cladding, it's also 75mm longer, 30mm wider and has 15mm more ground clearance – all minor things but enough to tell you that it's not a normal Picanto. Don't go thinking that this extra ground clearance will give you off-roading ability, though – it won't! Elsewhere, it features 'SUV-style' bumpers and front and rear skid plates.

You also get distinctive green highlights around the grille and fog lights, too. Our car also came in 'look at me' lime green that was truly unmissable. Granted. you don't have to have it in such illuminous palettes.

While these details won't be for all, the Picanto X-Line looks interesting and stands out on the road – something that will appease as many people as it will put off.

Some of the X-Line's interior flair has also made its way into the interior, with white and green detailing on the door cards, as well as lime green stitching to the flat-bottomed steering wheel, gear lever gaiter and armrests.

While it's not as vibrant as the exterior, these touches are just enough to set it apart from the standard Picanto. Interior quality is not quite up to the standard of the Volkswagen Up!, but everything feels well-built and assembled like it was built to last, even if you do get a few too many scratchy plastics. The seven-inch touchscreen is also loaded with features, including Apple CarPlay, Android Auto and Bluetooth.

The Picanto is a city car so you can't expect MPV levels of space. Kia claims the Picanto offers class-leading boot space, and with a 255 litre boot that seems unusually spacious for a car of this size, we can't dispute those claims. The rear seats are only really suited to children at best, though.

The X-Line is very well-equipped for the price, costing £12,595 for the manual or £650 more for an automatic transmission. The X-Line's styling touches only set you back a few hundred pounds more than the similarly-equipped GT Line grade, with a range-topping GT Line S model coming in at £13,995.

On the exterior you get the X-Line styling pack, LED daytime running lights and 16-inch alloy wheels. The safety kit fitted to such a small car is also impressive, with features including autonomous emergency braking, hill start assist, torque vectoring to aid stability if the car senses a loss of control and electronic stability control.

The Kia Picanto is a charming city car, and the addition of an X-Line trim line with its quirky looks has only added to this, and will no doubt appeal to many buyers wanting a piece of the crossover pie.

While it's not fast, not all that practical and isn't suited to motorway driving, you have to remember that this was never what the Picanto was made for.

As a city car, though, it is hard to fault. It's nimble, well-equipped and big on the safety front, and should be very near the top of your city car shopping list for all those reasons.

And if you find the X-Line's looks a bit garish or unnecessary, the standard Picanto is equally as good for city motoring.