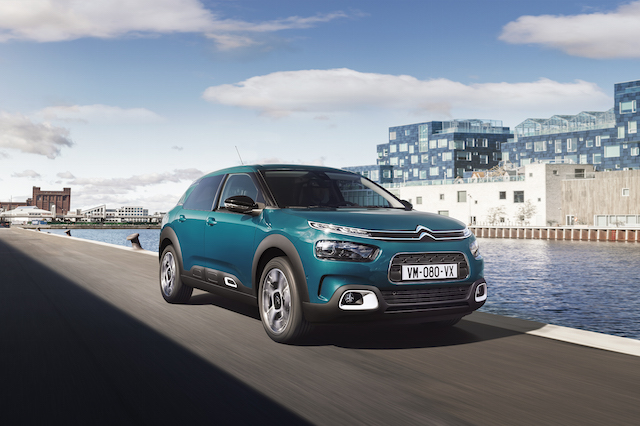 The Citroen C4 Cactus was a true love-it-or-hate-it car when it was launched in 2014. It was famed for its quirky scratch-resistant airbumps, injecting some much-needed character into the Citroen range. Just over three years later, the French manufacturer has facelifted it, giving the Cactus a wider and more upmarket appeal than before. We get behind the wheel to try it.

It's reasonable to say that the last C4 Cactus was a characterful car in a class somewhat lacking fun. Now, though, the small SUV gap has been filled by the equally quirky C3 Aircross. This means the C4 Cactus has had to move upmarket, as well as replace the gap in its range left by the discontinued C4 hatchback.

This has led the new model to have a mix of hatchback and crossover styling cues, as well as a price slotting between the two classes.

The new model also features some new tech that will - in time - get rolled out across the rest of the Citroen range.

The main standout feature here is its new 'Advanced Comfort' system. Citroens of the past were renowned for their soft ride, and this system is clearly trying to restore it on this new model.

While it isn't a fully-hydraulic system, it does feature hydraulic dampers on either side of the shock absorbers to help reduce the impact from bumps, while keeping the car stable. Advanced Comfort also includes extra soundproofing and new seats, which are incredibly comfortable and a true highlight of this revise model.

The Cactus' petrol line-up consists of three variants of the 1.2-litre PureTech engine – a unit widely used by PSA Group brands Citroen, Peugeot and Vauxhall. You have the choice of a near-gutless 81bhp version, a 128bhp variant – our pick of the range, although a slack five-speed manual gearbox lets it down – and a 128bhp output that's paired with a six-speed manual.

You also have the choice of a diesel, which offers superb fuel economy. A six-speed automatic gearbox is available on certain models, but is too jerky and hesitant to recommend over the petrol, unless an automatic is your only option. Citroen has also abandoned the traditional rev counter (on all models) which is an irritating omission.

While the Cactus' new suspension is undoubtedly very clever and comfortable, it's not quite the revolution that Citroen built it up to be. While it copes excellently on bumpy back roads, on motorways or smooth surfaces it feels uncomfortably floaty.

It does handle surprisingly flat, though, with little body roll but it's let down by overly-light steering that provides little confidence. It's no sports car, but for most buyers this will be of little concern.

The best way to describe the refreshed Cactus is toned down. While the last version was unmissable with its aforementioned large airbumps and roof bars, the new model is more conservative with its small airbumps and smoother body. We do love its new 3D-effect taillights, though.

Inside, it remains stylish with a suitcase-style glovebox and leather straps improvising as door handle pulls.

The latest model's interior functions are powered by a central touchscreen. This might sound like a great idea, but in practice it makes adjusting the air-con needlessly fiddly, and also difficult on the move. It's not helped by a touchscreen that lacks in responsiveness.

It can't be faulted on space, though, while the seats are very comfortable. They don't look particularly soft or supporting, but they're remarkably body-hugging and accommodating.

The main Cactus trim levels are Feel and Flair, and both come well-equipped. Base-spec Feel models come as standard with a seven-inch touchscreen, DAB radio, Apple CarPlay and Android Auto, Bluetooth and cruise control. While front electric windows, the rear ones simply pop-out, meaning there's no use for anything electrical.

Flair models add satellite navigation and a reversing camera, too.

As with the old model, there is a lot of scope for customisation, with a range of bright exterior colours, wheels and interior options.

While the new C4 Cactus may not be as divisive as the last model was, you can clearly see the method behind Citroen's thinking, as it is now far more appealing to the majority of people. The new 'Active Comfort' ethos has also worked when it comes to the ride and seats.

It's not perfect though, as irritating quirks remain that will continue to isolate its appeal. But the Cactus remains an interesting choice that's decent to drive, cheap to run and is spacious. Therefore, worthy of being on your shortlist.