Watch as a bull is transported by car 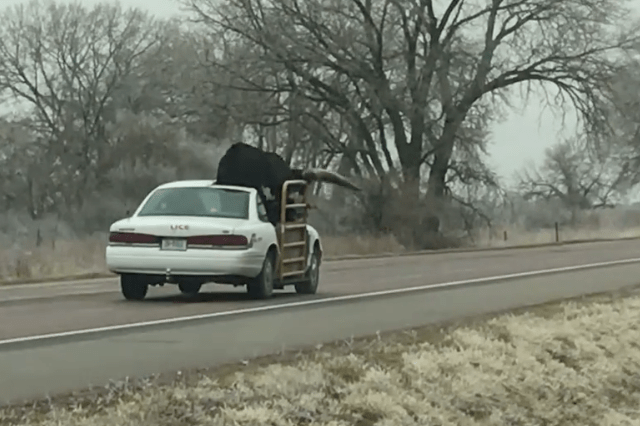 Plenty of animals have come to know the joys of a road trip, but the luxury of travelling by car is usually one exclusively experienced by creatures no bigger than a dog.

However, no one seems to have told the people of O'Neill, Nebraska, that there's a limit to what can be transported by car, as footage of a bull being driven down a dual carriageway has emerged.

The bull appears to be dead, as it is tethered to the car at its face, and that only adds to the bizarre nature of the sight, as it almost looks alive at first glance.

The incident was caught on video last Saturday, and the cameraman told of his bemusement at the bizarre sight, saying: "We were driving down the highway on our way to visit family when I noticed something odd protruding out of the vehicle ahead of us.

"We proceeded to pass the vehicle and had to take a second look as we couldn't BULL-ieve our eyes. We pulled over about half a mile ahead and waited for it to come by again so we could see it again and take a video to share with friends and family. We've seen plenty of dogs with their head out of a window but never an entire longhorn steer!"

SEE ALSO: Driver terrified as spider dangles over her head

The vehicle carrying the bull seems to have been customised for this very task – and also appears to be a police car. Quite why O'Neill's police department needs a bull-friendly vehicle we're not sure, but we don't expect to see this emulated in the UK any time soon!