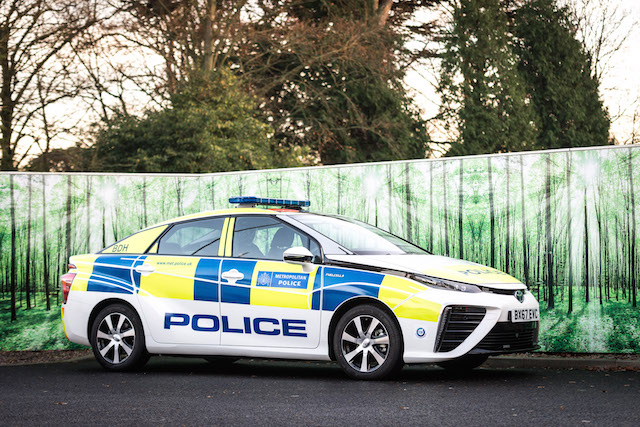 The Metropolitan Police Service has joined forces with Toyota to develop the largest hydrogen fuel cell police fleet in the world, with 11 examples of the Toyota Mirai.

The first of the hydrogen-powered saloons have already joined the fleet, with the help of a fuel cell and hydrogen grant allowing the move to be feasible, as the Mirai costs an expensive £66,000 new, thanks to the complex technology fitted to them.

See also: Autonomous technology could arrive in Toyotas within the next five years

See also: Where is your money safest? The UK's best hybrid buys for depreciation

The fleet are the first zero-emission cars on the Met's fleet, which the force's commander, Neil Jerome, described as being an "exciting development" for the Met police.

He said: "We are delighted to have taken delivery of these cars to support policing in London. Since late 2015 we have been actively looking at ways to hybridise and electrify our fleet as well as exploring other new technologies such as hydrogen.

"This is enabling us to make great strides towards our ambition of procuring 550 vehicles as zero or ultra-low emission by 2020."

The Mirai, translating from Japanese as 'the future', was one of the very first hydrogen-fuelled cars on sale in the market, and is a rare sight on roads thanks to its price and lack of demand. It actually offers a better range than most new electric cars, with one tank of hydrogen lasting roughly 300 miles.

Seeing a Mirai police car will certainly make a refreshing change from seeing swathes of BMW police cars in the capital, although with just 11 distributed for the force, don't expect to see them all that often. Especially when just 41 others were UK registered as of Q3 2017.