Ferrari F40 proves snow is not just for SUVs 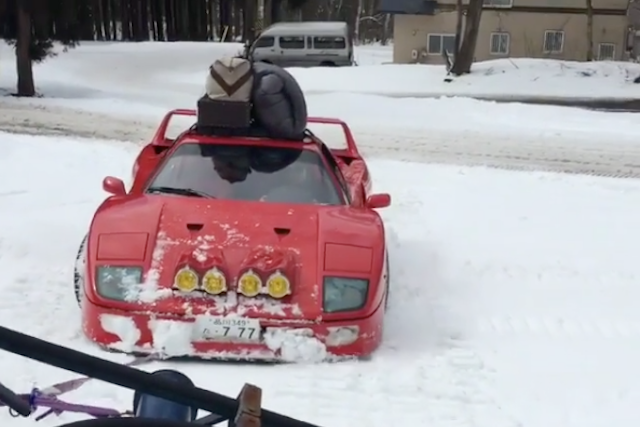 As the horizon turns white and the roads lay thick with snow, you'll probably find yourself staring wistfully at big, rugged SUVs. But one rebellious sort has proven that you don't need high ground clearance and four-wheel drive to drive in the snow, after being filmed taking their Ferrari F40 onto a road blanketed in the slippery stuff.

Admittedly, the Ferrari doesn't exactly appear to be covering ground effortlessly. In fact, it's being towed by another vehicle, and the footage shows the front wheels seemingly having little bearing on the car's direction of travel. The video was shared on Instagram.

The low front end acts as a plough, too, scooping the snow into the vehicle's air intakes. It's fair to assume then that without the tow vehicle this F40 would struggle to cope with any more than a light dusting.

Loaded up with camping gear on the roof and with four foglights attached to the front, the F40 appears to be the same one that appeared in an incredible Red Bull promotional video two years ago. That footage showed the F40 effortlessly drifting through a snowy forest, but a behind-the-scenes 'making of' video showed that it was fraught with complications.

Regardless, the videos are a great display, and prove that if you're brave enough, you can drive almost anything in the snow. We'd still advise against taking your own Ferrari out during periods of heavy snow, though.