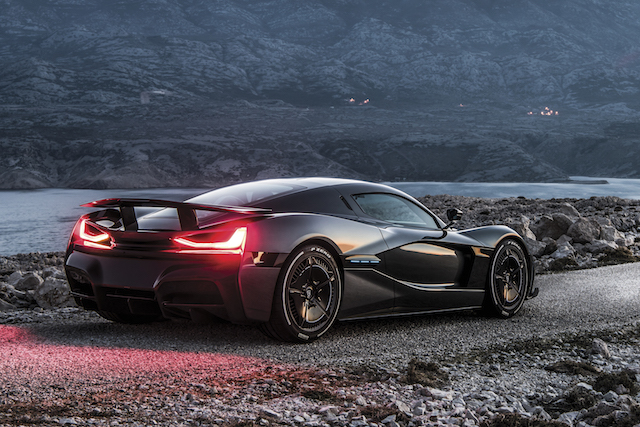 Croatian manufacturer Rimac used the Geneva Motor Show to debut its new all-electric C_Two hypercar, a successor to the incredible Concept_One. The latter car shot to fame after former Top Gear and current Grand Tour presenter Richard Hammond crashed it during a hillclimb event – but Rimac's not taking any chances with the new model.

In a cheeky nod to the presenter's fiery accident, the firm has added a new feature to the C_Two – a fire extinguisher in between the front seats. It's held in place by a leather strap bearing the legend 'in case of hill climb, extinguish fire'.

Luckily, Hammond appears to have taken the jibe in good faith. Speaking to Drivetribe, the 48-year-old presenter said: "I'm delighted. I've always wanted to have a real influence in car design. And now I have!"

The incident took place while filming an episode of Amazon Prime's The Grand Tour, the motoring show hosted by ex-Top Gear trio Jeremy Clarkson, James May and Hammond. While filming a section about hillclimb racing, Hammond lost control of the 1,200bhp Concept_One and flew 300 feet down the side of a mountain. The vehicle landed on its roof and subsequently burst into flames.

However, Hammond luckily crawled free of the vehicle before the fire, and sustained only a broken leg. That's in stark contrast to his previous crash in 2006, where a jet-powered dragster blew a tyre and flipped over several times. Hammond was left in a coma for two weeks and suffered permanent brain damage.

The new C_Two is even more powerful than the Concept_One. Rimac claims it has more than 1,900bhp and will accelerate from 0-60mph in just 1.8 seconds. It loses out on top speed, however, with its 258mph maximum beaten by the Bugatti Chiron's 261mph.