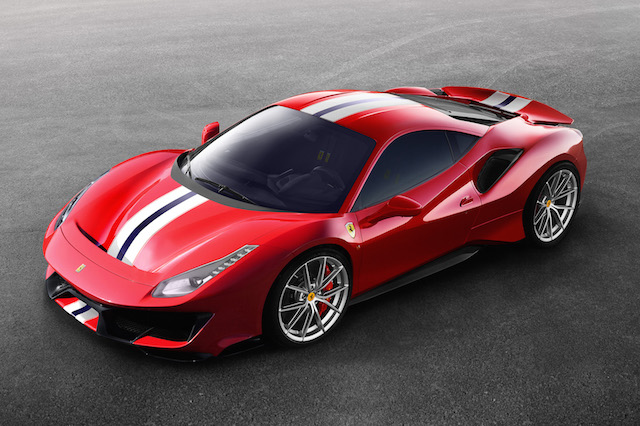 Ferrari has taken the covers off its new, track-oriented performance car, due for a public unveiling at the 2018 Geneva Motor Show.

Named "Pista", from the Italian for track, the special edition 488 follows on from predecessors like the 458 Speciale, 430 Scuderia and 360 Challenge Stradale.

Ferrari reveals track-focused 488 Pista
Up Next

The 488 Pista uses technologies Ferrari has developed in its 488 Challenge and 488 GTE racing cars, including lightweight materials, aerodynamic solutions and engine output.

That engine is Ferrari's most powerful V8 ever. The 3.9-litre, twin-turbo V8 produces 710bhp – 49bhp more than the 488 GTB. It's lighter than the original road car's V8 too, with titanium connecting rods and a lightweight crankshaft direct from the race cars. Carbon fibre intake plenums, a lighter flywheel and inconel (nickel-chrome alloy) exhaust manifolds help reduce weight in the engine bay.

Ferrari saves weight elsewhere with extensive use of carbon fibre. The engine cover, front and rear bumpers and rear wing are all carbon fibre. There's a set of optional 20-inch carbon-fibre wheels too. You'll find plenty of the material in the vehicle cabin too. The weight savings result in a car that's 90kg lighter than the original, at 1,280kg dry weight.

The Ferrari 488 Pista adopts some interesting aerodynamic solutions too. At the rear there is a new design of diffuser, which is similar to that of the 488 GTE endurance racer. There's a new "dolphin tail" rear wing too, rather reminiscent of the wing from the LaFerrari.

It's at the front where the most novel changes occur. Ferrari has incorporated the F1 "S-Duct" into the vehicle's nose. This huge air channel feed under the nose and then up over the bonnet, allowing the entire upper section of the front of the car to act as a front wing. There's a new design for the front splitter too.

This all gives the 488 Pista a 20 per cent improvement in downforce compared to its 488 GTB parent.

The official performance figures for the 488 Pista give a 0-60mph time of 2.6 seconds. The top speed is in excess of 211mph.