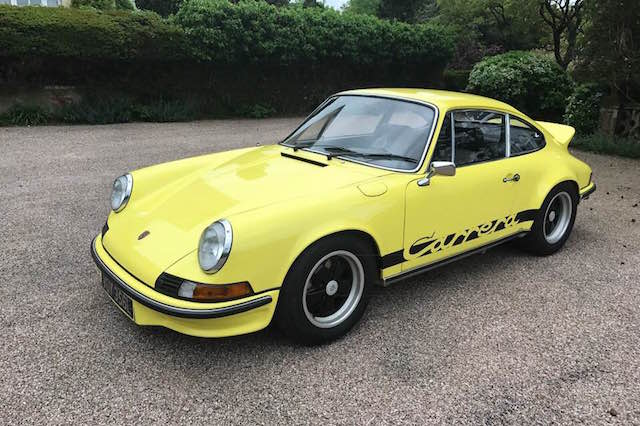 A 1973 Porsche Carrera 2.7 RS Touring has been stolen from a car park in Pimlico, Central London.

The light yellow Porsche is one of only 1,580 examples in the world, and owner David Clark discovered that it was missing on Saturday, February 17. However, it could have been stolen some time before this date, as he had been away for several weeks with his Le Mans-winning racing team, Jota Sport.

Clark, who is a successful businessman and owner of the Taylor & Crawley classic car dealership, estimates that his Porsche is worth £500,000, though some similar examples have sold for considerably more at auction.

See also: Man finds Porsche in woods 27 years after it was stolen

Speaking to AOL UK, Clark said that the car was purchased for his own driving pleasure rather than as an investment, and that it was "a really, really lovely car".

Speaking about the theft, Clark said: 'I've asked around, and the consensus is it was likely stolen to order.'

'I think these people are pros. One guy I spoke to knows all about this and he said it was probably a professional thing and that I had no chance. They're just too good, whether it happened an hour, a day, or a week before I realised it was missing.'

Clark's incredible personal collection of cars also included the famous green and yellow Harrods McLaren F1 GTR until it was sold in 2017, and the Aston Martin DP214 often seen at the Goodwood Revival race meeting is another of his most well-known pieces of metal.

The car's number plate is VOY 356L, with the chassis number 9113601175. As per a Silverstone Auctions listing of the car from a previous ownership, the engine number is 6631147. As the car was initially sold in Germany, it is left-hand drive.

Clark has said that a reward will be granted to anyone who can help him track down his beloved Porsche.

Impressive track drive system can maneuver in any direction

From the red carpet to the drive-in at Cannes