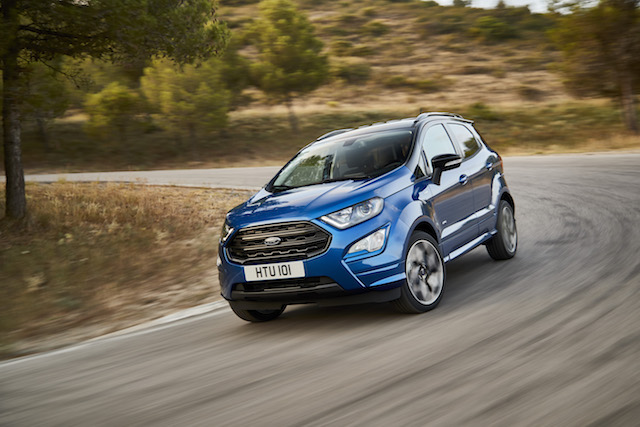 Ford has given its EcoSport a welcome refresh, giving its baby crossover a new look, a fresh interior lifted from the Fiesta and a new sporty trim level. AOL Cars gets behind the wheel to see if these changes have actually made any difference.

The Ford Fiesta has been at (or very near) the top of UK new car sales charts for some time, with its compact size, good driving dynamics and attractive price appealing to many buyers. You would think then that it's safe to assume that a Fiesta-based SUV being launched at a time when SUV sales were booming would be an enormous hit? But you would be firmly wrong.

The first-generation Ford EcoSport received a frosty reception from British buyers to say the least. The fundamental problem was that Ford was lazy in its R&D, choosing to make a car that "fits every market", which in the real world rarely works. It was gruff, badly engineered and looked old-fashioned the day the covers were first pulled off it at the New Delhi Auto Expo in 2012. Not the best start.

Despite numerous facelifts in just a few years, Ford still couldn't get it right. That is until now when Ford has given its EcoSport a little more than a quick refresh.

Unlike the previous 'facelifts' that Ford has given the EcoSport, it appears there are noticeable differences this time. So bravo Ford.

The biggest update is the fresh interior, where Ford has taken many of the new Fiesta's interior elements and dropped them in the EcoSport. The brighter dash, and well-sized touchscreen (fitted to higher-spec models) are welcome revisions, as is a general better fit and finish than before.

This all comes at a price, though, with the new model costing nearly £2,000 more than the last one.

Just three engines are available on the EcoSport, the 1.0-litre EcoBoost petrol available with either 123bhp or 138bhp, and a new 123bhp 1.5-litre diesel engine. We got behind the wheel of the 123bhp 1.0-litre petrol engine. Other lower-powered engines are also on the way.

It's a flexible engine, although the weight of the EcoSport dulls performance. It's pretty slow, taking 12.5 seconds to get from 0-60mph – making overtaking a bit of a struggle. You also don't want to come across too many hills in it, as it means you have to keep changing down gear which tires after a while. Once you do eventually get up to speed, though, the engine will happily sit at motorway speeds with little fuss.

Fuel economy is disappointing, though. On a long journey in careful driving, we really struggled to get it over 40mpg. If you do long journeys frequently, we would recommend the 1.5-litre diesel for this reason.

Unfortunately the EcoSport has lost some of the Fiesta's renowned sparkle behind the wheel. While the EcoSport is by no means a shocking car to drive, its top-heavy stance means that it does roll through corners.

It's worth mentioning though that this was not designed to be fun to drive in the same way that the Fiesta was. The steering still feels direct and has a good weight to it, but it doesn't have a joyful element to it like the Fiesta does.

The large optional 18-inch wheels fitted to our test car were also noisy at speed. It didn't help that they were low-profile tyres, either. If you are looking for a more relaxing and peaceful drive, you are better off saving yourself £400, and remaining with the standard 17-inch alloys fitted to ST-Line trim cars.

UK Drive: Ford EcoSport
Up Next

While the latest EcoSport's design is evolutionary rather than revolutionary, the changes that have been made have paid off. The smart-looking new grille and lights have made the EcoSport look like a brand-new model for the first time, as opposed to an outdated version of a Fiesta.

Ford has also thankfully binned off the old-fashioned boot-mounted spare tyre, too. It was a blatant lazy cost-saving effort to not have to adapt the EcoSport from foreign markets for the UK. By removing it, it shows Ford is now making a real effort with the car.

The introduction of the ST-Line also helps to put the word 'Sport' into EcoSport for the first time, with the trim being available with bigger alloy wheels, an aggressive bodykit and a two-tone colour combination.

And while the 18-inch wheels do look smart, you seriously need to question how much you value ride quality.

Ford has practically lifted the interior from the Fiesta and put it in the EcoSport – a wise move if you ask us. The central large eight-inch touchscreen fitted to our Titanium test car looked the part and gave some modern flair to the interior, too. Thankfully the mass of buttons that Ford loves to fit to its cars have been removed to make way for the smart screen. The steering wheel does have too many buttons still, though.

Even with a raft of optional extras, though, it still lacks the finesse and luxury of rivals such as the Skoda Karoq and Volkswagen T-Roc, thanks to some scratchy plastics.

It's largely spacious, with plenty of rear head- and legroom even for adults. Probably our biggest gripe about the EcosSport's interior, though, is the side-hinged boot that makes parking needlessly awkward. You can forget being able to reverse into parking spaces ever again, as the boot opens out and because of its struts, there is nothing stopping it from slamming into a wall or car parked behind you. It's a stupid and unnecessary feature that should have been abandoned on this latest facelift.

Our top-spec Titanium came well-equipped, although it's no longer the bargain crossover it once was. It costs £19,495 and comes as standard with 17-inch alloy wheels, LED daytime running lights, a reversing camera, half-leather seats and cruise control.

Ford has certainly improved the Ecosport, but boy did it need it. Driving the new one makes you realise just how backward the last model was. Ford has seriously improved the Ecosport's interior, the way it drives and tweaked the way it looks for the better, and made it a car that people will no longer buy by accident when wanting a Fiesta, and falling for the EcoSport's crossover looks.

Yet, fundamental issues still remain. The boot alone makes it hard to recommend alone just because it's so impractical, while the fuel economy is also disappointing.

These issues could be forgivable if Ford had kept the EcoSport at the bargain price it was before. But it hasn't, and it now looks pricy compared to accomplished rivals such as the Seat Arona and Skoda Karoq. It's hard to recommend when the Fiesta it's based on is as good as it is, and with so many better rivals surrounding it.