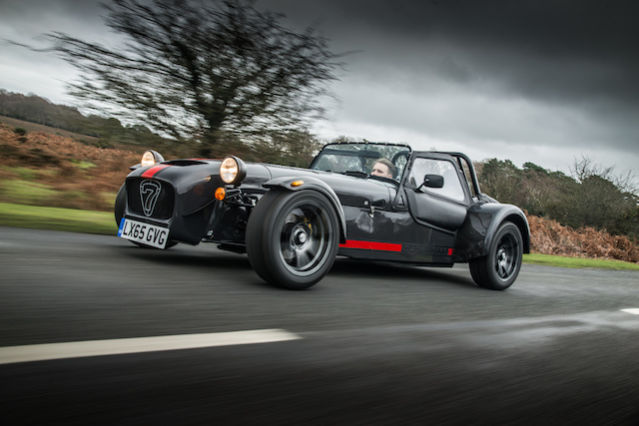 AOL Cars gets behind the wheel of the insane Caterham 620S to see if this bargain British bruiser has what it takes to mingle with the big boys.

Normally, going fast entails significant financial outlay. The Bugatti Veyron, famously one of the fastest cars ever built, cost the best part of £2 million - and even secondhand values are similarly strong.

If you're less wealthy than the average oligarch, though, you could go the Caterham way. The 620S we have here will hit 60mph in under 3.5 seconds, but costs from just £44,995. In short, there are few ways to go this quick for as little cash.

Our 620S was supplied on the wider, more forgiving SV chassis. That means there's more room for taller drivers - and wider ones.

The 620S also gets a smattering of design cues to help it stand out, including a nose with an embedded air intake - a quick way to differentiate it from the rest of the Seven lineup.

The biggest changes are mechanical - the supercharged motor is supremely powerful, but the S pack brings a softer and more road-biased suspension setup than the one you'd find on the hardcore 620R.

The 620S' engine is nothing short of remarkable. It produces 310bhp from just a 2.0-litre capacity, thanks to a supercharger. The car weighs just 610kg, meaning a power-to-weight ratio of 508bhp per tonne. That's more than even hardcore supercars such as the Ferrari Enzo or McLaren 650S.

This is simply a breathtaking amount of power to be found in a 'regular' road car. It's sent to the rear wheels via a five-speed manual transmission, and even though it's about as aerodynamic as a brick, the 620S will go on to a top speed of 145mph.

If you're looking for economy, the Caterham way isn't the route to take. The 620S will supposedly return around 30mpg on the combined cycle, though this will drop sharply under heavy driving. That being said, the S model benefits from a larger fuel tank, so long journeys are a more viable prospect.

Driving the 620S is a dramatic experience. The steering is incredibly well judged, and even the smallest of hand movements direct the Caterham exactly where you want it. The five-speed gearbox is smooth to operate, with a deliciously short throw, and the softer S suspension is exactly what you want for tough UK roads - not too firm for potholes, but not so soft as to leave the car feeling wallowy.

Then there's the performance. Nothing can quite prepare you for the way the Caterham fires down the road, with the twin-outlet exhaust howling in a demonic roar. There's really nothing else quite like it on the road today.

Caterham 620S review
Up Next

The Seven remains somewhat of a design classic, but the 620S is about as modern as that look can be. As mentioned, it's recognisable thanks to the vented nose cone, while it also benefits from a gunmetal colour-painted chassis, giving it a stealthy, undercover look. Of course, there are plenty of options that you can add to make it look even more special. Caterham can even finish your 620S with any colour you could think of - just supply the paint code, and it'll do the rest.

Everyone loves the look of a Caterham - there are few who don't stop and stare when it passes by. It's still an iconic design, even 50 years after the original was penned.

Much like any other Caterham, the 620S isn't particularly well endowed in the interior department. Though the S pack brings a heater and a 12V socket for charging a smartphone, that's pretty much it in terms of in-car features. The biggest benefit is the full windscreen, hood and side screens, making this Caterham much more usable in typical British weather.

That's not to say it's a dull place to sit. The carbon fibre dash looks and feels well made, and the driving position is about as spot on as you'll ever find. The variety of toggle switches may be difficult to decipher at first, but using them soon becomes second nature after time.

As mentioned, you don't get a lot of toys for your money. The key attributes are all mechanical - the car's overall cost is spent on the engine, chassis and gearbox. As standard, you get a lovely Momo steering wheel, black leather seats and a four-point racing harness, as well as the previously mentioned windscreen and side screens. The 15-inch alloy wheels are shod in sticky ZZS tyres, while a limited-slip differential comes included in the price too.

There are swathes of options to choose from too. Heated carbon-fibre seats will no doubt appeal to those who want to be a little warmer, while that wider SV chassis is a good option for those who want a little more space in the cabin. In truth, anyone over six foot will struggle for room in a 'regular' Caterham, which is why the SV chassis is such a handy option.

The Caterham 620S is an incredible vehicle, capable of taking down nearly any supercar on sale today at a fraction of the price. With that being said, even lesser Caterhams can deliver big thrills without the razor-sharp edge you'll find in this one. Though the S pack brings many features designed to make the 620 more comfortable, it remains spiky to drive, with traction close to non-existent in the wet. Make no mistake, it's thrilling, and cracking value when you consider the price - but in truth, you'd likely be just as happy with a lower powered model at half the price.