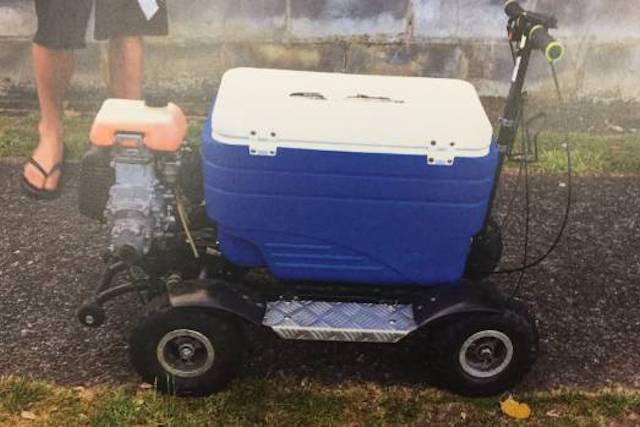 In hindsight, maybe adding a tiny petrol engine to a beer cooler wasn't the smartest idea in the world. New Zealander Lani Hunt is certainly feeling the sting, after being caught driving the 'motorised chilly bin' by police – while drunk.

Hunt was stopped while driving the four-wheeled beer machine down a road by officers in the North Island city of New Plymouth, according to the Stuff.co.nz news website. He was apparently unaware that the tiny machine isn't actually legal for use on the public roads, much less while the pilot is drunk and lacks a driving licence.

SEE ALSO: Man caught drinking while sat on the bonnet of a moving car

His breath test revealed 54 micrograms of alcohol per 100ml of breath – more than double New Zealand's legal limit of 25 micrograms.

After being caught, Hunt pleaded guilty at the New Plymouth district court. He was fined NZ$500 (around £263) but given no disqualification for his joyride.

The summary of the case read: "In explanation the defendant admitted to drinking alcohol and stated that he had just gone to the dairy to get some smokes and had not realised it was illegal to drive the motorised chilly bin on the road."