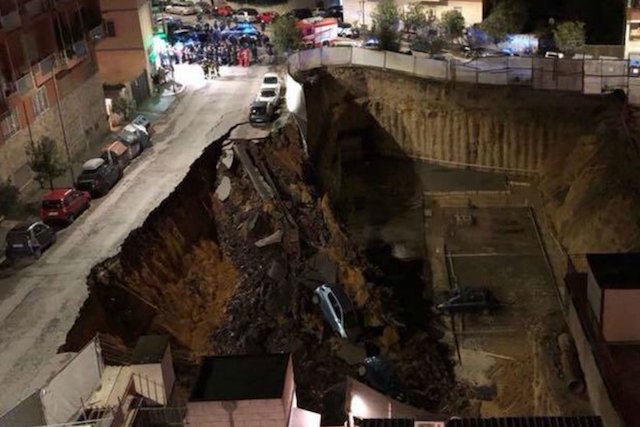 A gigantic 30ft sinkhole has opened up in a Roman neighbourhood, forcing families to flee their homes and swallowing no fewer than six cars in its gaping maw.

The massive collapse happened at around 5:30pm in the city's Baldunia neighbourhood. Nobody was injured, officials say, but 20 households were evacuated to hotels as a precaution against any further collapse.

Good morning from Rome! This is what happened last night in Balduina area: a sinkhole near a construction site swallowed several cars but, fortunately, no people. Someone says it's a fitting metaphore of #Italy right now: promises, projects, big announcements and then... 🇮🇹 pic.twitter.com/Rv8eCPPcXW

The cars involved, including a Hyundai Tucson, a Peugeot 107 and a quintessentially Italian Fiat 500, will likely be writeoffs after plunging into the deep cavern of a neighbouring building site, which was being redeveloped for housing.

The cause of the collapse is not yet known, but workers carried out repairs after a large water spill between January 25 and 28. Sinkholes usually form when soluble rock underneath roads is eroded away, leaving just a thin crust of tarmac to support itself.

It is possible the water spill eroded the ground underneath the road, causing the collapse.