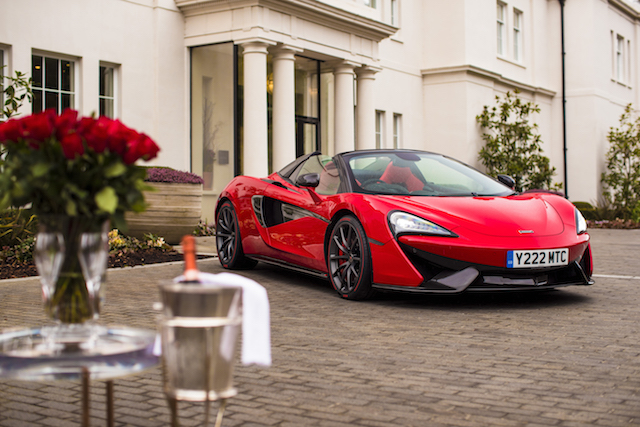 Valentine's Day is a day of love for many, and McLaren has joined in the celebration with a unique romance-themed 570S Spider painted in Vermillion Red, featuring a "seductive" black and red interior.

The Woking-based supercar manufacturer has shown off the car specifically for February 14, taking advantage of its various divisions, including McLaren Special Operations (MSO) to create a one-off car. Vermillion Red comes from the firm's 'Elite' colour palette, with the cabin being a 'By McLaren Designer Sport Interior'.

The supercar also features carbon-fibre touches, and MSO elements such as an Apex Red leather-trimmed steering wheel and Indian Red seatbelts. Even the brake callipers and the Pirelli P-Zero tyres had to be painted in red, too.

Other than those special romantic touches, the 570S Spider remains as standard with LED front and rear lights, a 10-inch TFT display and hand-stitched leather.

Under the bonnet, the 570S Spider is powered by a 3.8-litre twin-turbo V8 engine that can accelerate from 0-60mph in just three seconds and onto a top speed of 204mph with the roof up – or 196mph with it down.

McLaren has not revealed any price for the unique car, although it says that it has already been accounted for. However, as MSO's vast customisation program allows for McLaren's customers to specify their car exactly the way they want it, it means that there is nothing stopping buyers from creating a similarly distinctive model.

It won't come cheap, though. The list price £164,750 for the 570S Spider, after which you will have to pay tens-of-thousands of pounds for the pricey upgrades and alterations.

There's no word as to whether McLaren commissioned the car itself, either, or if a wealthy customer had the car made specifically for the day. We'd love for the latter to be the case...