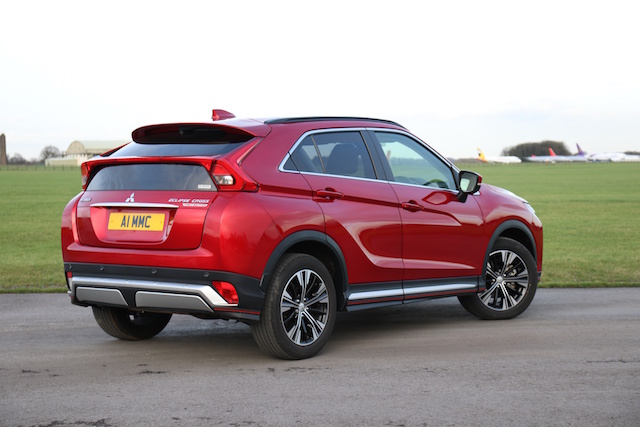 The Mitsubishi Eclipse Cross is definitely one of the more unusual looking SUVs on sale in this crowded market. AOL Cars gets behind the wheel to see if there is more to it than just its bold looks.

You only need to take a quick look at Mitsubishi's product line-up to see how important four-wheel-drive cars are to its brand. The UK line-up currently only has one non-SUV or four-wheel-drive on sale, the Mirage city car. So its range is predominantly SUVs made up of the Shogun, ASX, L200 and popular Outlander. Mitsubishi also has another SUV on sale later in the year – the Shogun Sport.

But for now, here is the Japanese manufacturer's latest off-roader, the Eclipse Cross. It's bold, practical and fantastic value, and is aimed to compete against some of the best-selling SUVs such as the Seat Ateca, Nissan Qashqai and Kia Sportage.

The Eclipse name has been used before on a coupe in the mid 2000s, but the Eclipse Cross is entirely different. It sits on the same platform as the Outlander, although Mitsubishi says it shares "very few" components with that car.

It debuts the brand's latest design language, comprising a bold face, chiselled flanks and an interesting tiered rear. Under the skin there is an all-new engine and gearbox, too.

This is also the first Mitsubishi to be designed wholly by Tsunehiro Kunimoto, the company's current design boss, who joined the firm in 2014.

Currently just one powertrain option is available – a 1.5-litre turbocharged petrol engine. It produces 161bhp and offers plenty of low-end torque, although at the expense of fuel economy which is just in the mid 30s in real-world driving and high CO2 figures of 159g/km.

The only option you have is the choice between a six-speed manual or a CVT automatic gearbox. While the CVT is one of the better ones we've tested, it's by no means a match a 'normal' automatic. It just seems to rev too much, and doesn't allow for access to the low-end torque which you can have with the manual gearbox.

Mitsubishi does say that a hybrid model is in the way, and that it would consider adding a diesel option if demand for the fuel increased, but for the time being, this is your only option.

Mitsubishi has put a lot of focus on making the Eclipse Cross good to drive, and to an extent it's paid off. It's definitely the most exciting Mitsubishi to drive in the current range, although it's not as fun as a Seat Ateca, or as comfortable as the Nissan Qashqai.

The driving position of the Eclipse Cross is much higher up than its rivals, which does give you a good view of the road ahead. The view out of the rear, is not as good, though, because the split tailgate rear isolates your view. While we understand why Mitsubishi has given it this look, in filthy British weather, and without a wiper for the lower section, visibility will soon be seriously reduced.

The aforementioned split-view rear window is definitely the most eye-catching part of the Eclipse Cross's design, and it gives an even bolder look at night with the full-width tail-lights.

The rest of it is less dramatic, with chiselled flanks on the rear wheel arches, and of course plastic cladding, as it seems impossible for any crossover designer not to use it.

The latest Mitsubishi face certainly suits the look of the Eclipse Cross. It looks modern, bold and rugged and stands out against bland-looking rivals such as the Ford Kuga and the Renault Kadjar.

Mitsubishi says the interior on the Eclipse Cross is its best yet, with a stacked layout and soft-touch plastics on the dash. If you look closer, though, you do begin to notice cheaper feeling materials.

The button layout is a bit messy, with controls hidden behind the steering wheel being particularly odd. The touchpad controller is also more style over substance, as a simple click wheel or directional arrows would be far more functional.

It's very spacious, though, with plenty of legroom for rear passengers and a bench seat that can slide and recline to balance people with luggage. The sloping coupe-like looks do have a slight effect on rear headroom, although not noticeably. The boot is a good size, too.

The Eclipse comes loaded with kit for the money. Entry level '2' cars come with Android Auto and Apple CarPlay, a DAB radio, cruise and climate control and a rear-view camera.

Compared to its competition, the Eclipse Cross is very reasonably priced – particularly when you consider the powerful engine and standard equipment. Even a top-of-the-range car loaded with kit comes in at under £30,000.

On paper, the Eclipse Cross looks impressive. It comes with generous equipment and a powerful engine at a bargain price. It's also one of the most striking crossovers available and is spacious, too.

However, rivals offer better engines and interiors, and the thirsty petrol engine would just be too expensive to run if you cover high mileages. Yet, if you're tired of seeing the same mundane crossovers and fancy something a bit different, the Eclipse Cross is definitely worth a look.