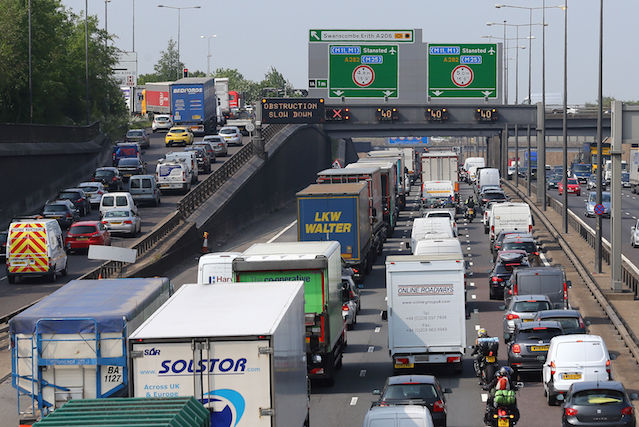 Research conducted by traffic information supplier Inrix, found that it was motorists in London which were the most affected.

Capital commuters wasted 74 hours in 2017 stuck in congestion – an hour more than the previous year.

After London – which came second in Europe behind Moscow (91 hours) – Manchester (39), Birmingham (36) and Luton (29) were ranked the worst cities for traffic.

Nevertheless, in Scotland, Aberdeen and Edinburgh's drivers lost 28 hours in peak times, while in Wales Newport was the worst area where motorists spent 25 hours a year in traffic jams. Belfast (21) was the worst in Northern Ireland.

Los Angeles, USA, took the crown as the world's most congested city with a 102-hour average.

The data also looked at the money wasted by each driver sitting in traffic. Over the course of a year, UK motorists spent an average of £1,168 each on lost time and fuel.

Graham Cookson, chief economist, said: "Combined with the rising price of motoring, the cost of congestion is astonishing – it takes billions out of the economy and impacts and individuals alike."

The study also named the A406 northbound from Chiswick roundabout to Hangar Lane as the UK's most congested road, where each driver spent 56 hours in congestion last year.

Despite the Department for Transport pledging an additional £23bn on road schemes, the RAC has said there is no "silver bullet to sorting out congestion".

Spokesman Rod Dennis said: "Ring-fenced funding for improving England's major roads from 2021 should help, but there needs to be an emphasis placed on providing cheap, practical, reliable alternatives to the car – especially in urban areas."