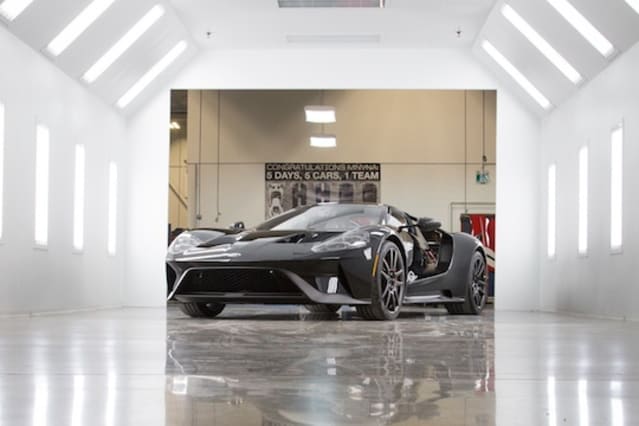 When you're in a job such as ours, you get to see the inner workings of car manufacturing plants regularly. These mammoth plants run by robots, feeding car after car through to the technicians who construct them.

Even on the smaller scale side of things, big machinery still plays a part, whether that's to assist lifting, turn the cars over for better access or hike them up and down.

Inside Ford's supercar factory
Up Next

SEE ALSO: Ford GT supercar with just 10 miles on the clock is up for sale

While they're usually clever, they can also sometimes be tedious and boring. I've stood lazily in a few, wishing I had a robot to carry me around.

It was quite a surprise to see, therefore, that one of the five biggest car manufacturers in the world is producing hand built supercars from a small facility in Markham, just outside Toronto.

It's not much to see from the outside, blending in with the rest of the industrial park it sits in, and you'd never guess what it holds inside.

Here they use little more than the man power of 140 employees and largely tools they can use with their hands to assemble this beast for the road. Standing in one corner of the workshop, almost all stages of the supercars' construction can be seen and, if you're lucky enough, sometimes hear one starting up.

This is the Ford GT, based on the looks of the iconic GT40s but with one of Ford's 3.5-litre EcoBoost engines tuned up to 638bhp. Weighing in at just 1,385kg, it can soar on to its top speed of 216mph – besting its competition from Ferrari and McLaren. It was first revealed back in 2015, and this year the first UK delivery finally made its way to its new home.

While American muscle is something Ford's of the past are renowned for, the GT is a far more delicate feat of engineering than you might imagine – one that many, bar the owners of these rarities and the people who build them, would ever get to see. Here at the factory, they produce one completed car a day although around 30 will be on the workshop floor at any one time in various stages. 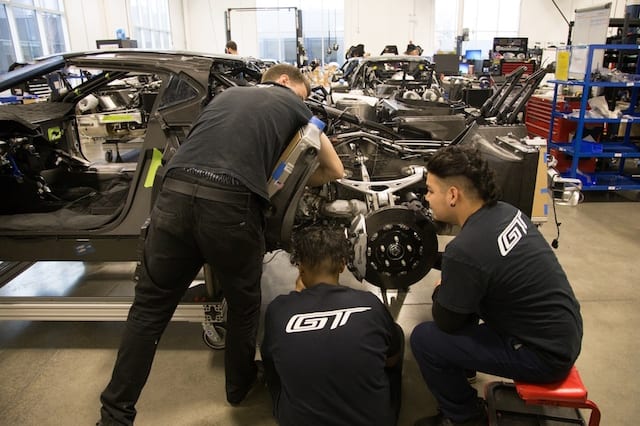 Multimatic is the company that owns the site and has the pleasure of assembling the GTs. The building we're walking around has been constructed especially to build these cars, however the company's usual fare fits in well with these cars. Its name is known by race fans. This workshop is like every carmakers' dream – small scale builds with a huge Ford budget.

Although the cars are assembled here, the parts come from all over the globe as vice president of engineering at Multimatic Larry Holt explains. On our side of the planet, the leather for the interior of the cars goes from the Highlands to Essex to be assembled before making its way over the Atlantic.

The monocoque of the car arrives at the plant already constructed. Here the panels – all carbon fibre – go on to the tub to check they align correctly before coming off again to be sprayed. The cars are given their unique VIN numbers, which can really be as unique as the customer wants.

The framework of the car with its roof attached then splits off in two directions – rolled across the floor by hand. One team will assemble the engine and fit it in the frame, while the other works on the cars suspension.

It might seem like a rudimentary system to carry this out by hand, but careful checks are put in place to keep the highest standard. While there are several work stations around and every team has their own role, they each check the previous work that has been done and can reject it if anything isn't up to standard. Holt tells us that, so far, they've never had to send a finished car back into the production line because it didn't meet their high standards.

When the two halves are fitted with the required parts, they're then reunited. The technicians can now begin fitting parts such as the brakes and fuel tank, before moving on to the more personal touches, like the interior.

As more parts go onto the car we can see what a jigsaw puzzle of parts this is, with almost every individual piece carefully redesigned for the lowest weight and to fit in the tightest space.

That said, as we navigate our tour, it's clear this isn't really like any other production line. We're talked through the features and parts by members of the team, but the technicians fitting them have the time to wander off and grab examples from the shelves. Some even have time to stop for a quick chat about the details of these precision pieces.

With these tightly packed away, the glass and finer interior details can go on, before the painted bodywork can go back on the car. This is where things get a little more exciting, as the cars need to be started up to check they're in good working order.

Here Multimatic has two rolling roads, ready to run the cars up to speed. They're measuring the results but also listening to check that everything sounds correct – more analogue checks in this digital world of car design. The growl of the GT is distinctive and unmissable, with a deep note that is unique on today's roads. 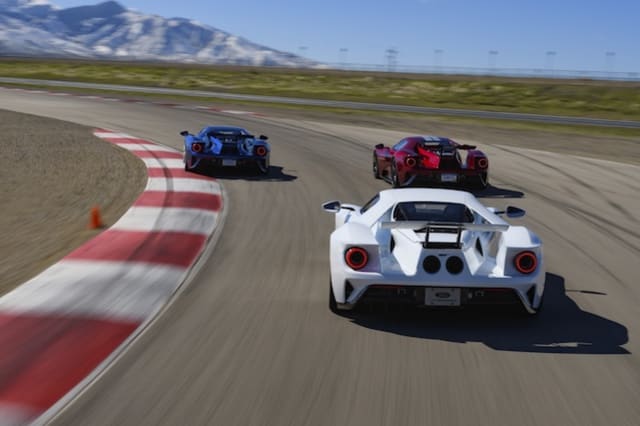 There's a final test as the light inside the tunnel, rather than at the end of, which illuminates the car from every angle and makes even the finest imperfection visible.

At the entrance to the workshop a photo of every car that has left the factory is featured. While some are more vibrant than most might like, there is a clear desire for the famous heritage colours. Gulf blue and orange is clearly popular but the team explains that even these are up for dispute, and customers have gone the extremes of finding specific winning years for their paintwork.

From start to finish, each car build takes around 22 days. It's a small team, in a comparably small factory, where they hand build these beautiful cars, but what's really clear is the love and passion for these cars. They all stand, squat or bend proudly under the car's winning titles – so far – as they construct what are mechanical art more than machines.