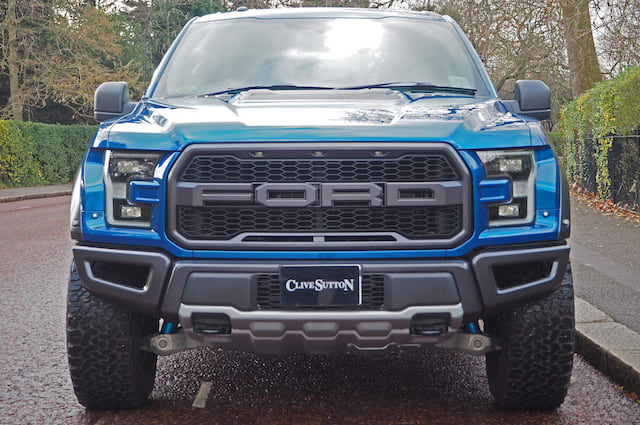 It's no secret that the USA loves a pick-up – the Ford F-150 has been the biggest-selling vehicle in the country for years, easily outstripping car sales. We've always missed out on the F-150 in the UK, though – it's too big, too thirsty, and quite frankly, too American.

But thanks to specialist car dealer Clive Sutton, customers in the UK can finally get their hands on a Ford F-150 in Brit-friendly right-hand drive configuration. Sutton's bespoke customisation programme is far from a back-garden job – the conversion uses sculpted moulds of precisely measured interior parts, mirrored to apply them to the RHD car.

RHD Ford F-150 Raptor now on sale
Up Next

Sutton's team developed their own steering rack for the right-hand-drive car, extensively recalibrating an existing one over the course of six months.

The completed models are Supercab versions, with a rear bench accessed by suicide doors. The interior has been equipped with Ford's Sync3 infotainment system, and has been reprogrammed with Europe-specific navigation and frequencies.

The F-150 will set lucky buyers back an impressive sum – a new model will cost a private buyer over £106,000 – while running costs are set to be seriously pricey, thanks to an official fuel economy rating of under 20mpg.

However, if a standard European double-cab pickup such as a Ford Ranger or VW Amarok simply isn't intimidating enough for you, the F-150 Raptor could be the ideal truck.

Want a similar level of American style, but need a covered load area and a luxurious interior? Sutton has also become the first company to import the latest Lincoln Navigator. The company will soon offer a RHD model of this, too. A Range Rover rival? We'll let you decide...