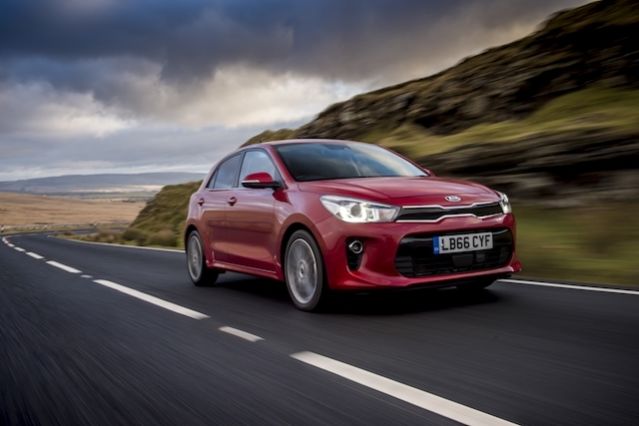 With big volume-sellers such as the Ford Fiesta and Seat Ibiza receiving serious updates, other manufacturers such as Kia have an even harder time on their hands to produce competitors. AOL Cars gets behind the wheel of the new Rio to see if it's a serious challenger to the supermini giants.

The Kia Rio is the Korean brand's rival to popular superminis such as the Ford Fiesta. While it might not be the first car your mind springs to in this crowded class, it's actually been around for a fair few years, and scores well as a value for money option.

Kia launched the fourth generation Rio last year, when it gained a fresh new look over the old model and increased in size a few inches in each dimension. As one of Kia's global best-sellers, it was important that the brand got this one right.

The Rio gains Kia's trademark slimline front grille, as well as smart LED daytime running lights. These give it the slick looks to compete against rivals from Ford and Seat, both of which launched new versions of the own superminis in 2017.

There's also a raft of safety technology, plus a redesigned infotainment system accessible through a seven-inch touchscreen. Unlike the last-generation car, it is now only available as a five-door.

As for running costs, Kia claims it will return 62.8mpg, while emitting 102g/km of CO2. However, like many of these small turbocharged engines, it's difficult to get anywhere near the claimed fuel economy figures. After a 300-mile journey in it, and with steady driving, we struggled to get anywhere near 50mpg.

While the Rio isn't a terrible car to drive, it's not exactly fun. The over-light steering may be great around town, but it's weightless and doesn't inspire much confidence on faster roads.

The engine's comfortable at motorway speeds, though, and doesn't feel strained at 70mph. It also rides well, with only hefty potholes threatening to upset the car's balance.

Unfortunately longer drives are made a trial by tyre noise. Though the engine is quiet, the road noise is very intrusive and makes conversation difficult.

Kia Rio road test
Up Next

The front of the Rio is smart to look at, and features Kia's distinctive and tidy 'Tiger-nose' grille flanked by LED DRLs.

Our car was fitted with 16-inch alloy wheels, which improved the ride but did nothing for the looks. They appeared lost in the Rio's arches. The old car was always at its best with larger alloy wheels, and this model is the same.

At the rear it is pretty dull to look at, and has hardly been altered from how the last model looked.

The absence of the three-door version doesn't help its image, either. Recently announced GT-Line trim should help lift the Rio's looks, but there's no denying that in standard trims it looks a bit basic.

The cabin of the Rio is very well laid out, and everything is logically positioned. The seven-inch touchscreen also makes the Rio's interior look fresh and modern, which it largely is.

It's spacious too, with plenty of room up front and the rear should be big enough to seat two adults comfortably. While boot space is good, it's let down by a high lip that makes getting any heavy objects in and out difficult.

There are some rather scratchy interior surfaces as well, particularly on the dash, which is where most manufacturers at least try and make an effort. The Rio, however, just has a very cheap plastic dash, which oddly contrasts with the upmarket image Kia tries to create with the faux leather upholstery.

In terms of equipment, the Rio represents superb value for money. Our top-spec '3' car might seem a bit expensive, coming in at £16,785, but considering the sheer level of kit you get, it's a great deal.

On the safety front, it has autonomous emergency braking, lane departure warning and hill-start control. On our 300-mile snowy journey, though, the braking assist refused to work because of the snow blocking the sensors at the front.

The Kia Rio offers bags of equipment, lots of room and a very capable engine at a bargain price. Our top-spec '3' car undercuts rivals, but outdoes them for kit.

However, it's let down by an uninspiring drive and awful tyre noise, while the dashboard isn't as premium as certain rivals.

Overall, the Rio comes out somewhat average in too many categories, which might not be enough to tempt UK buyers from their beloved Ford Fiestas and Volkswagen Polos.