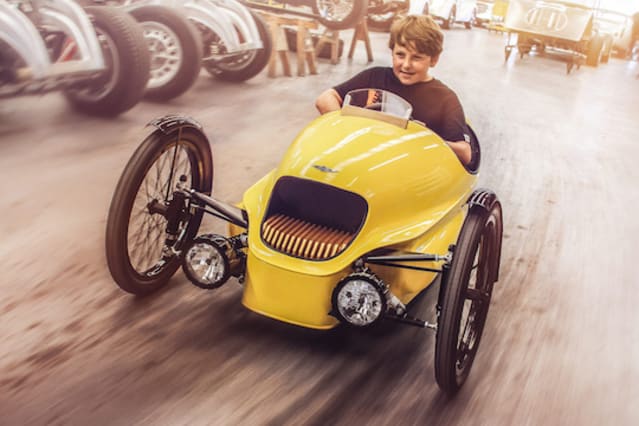 The traditionalists over at Malverns-based Morgan aren't the first craftsmen you'd think of to create an all-electric sports car. But the company did just that last year, when it announced the EV3 – a crazy three-wheeler with an electric powertrain and retro-futuristic looks.

Now, the company has launched a new version – aimed at the younger motorist. Say, aged twelve and under...

The EV3 Junior is a beautifully hand-crafted miniature version of the full-sized model. It looks almost identical to the larger model, and isn't just some plastic facsimile – it has carbon-fibre bodywork, a wooden dashboard and hand-stitched leather.

The EV3 Junior's electric powertrain gives it a top speed of 10mph and a range of about ten miles, making it significantly faster than most adult mobility scooters. It's available in three standard colours – Sport Red, Sport Green, or Sport Ivory – but Morgan will happily paint it any colour you like from its 40,000 strong library for a small fee.

Fans of a pre-bedtime drive will be pleased to know that the lights are fully functioning, while budding motorists can also customise their own EV3 with a choice of sticker packs.

The EV3 Junior's price reflects its handcrafted nature – it costs £7,995 including VAT from a Morgan dealer or the company's official online store. That's the price of a lightly used supermini – but there's not a Ford Fiesta in the county that's as charming as the EV3 Junior.