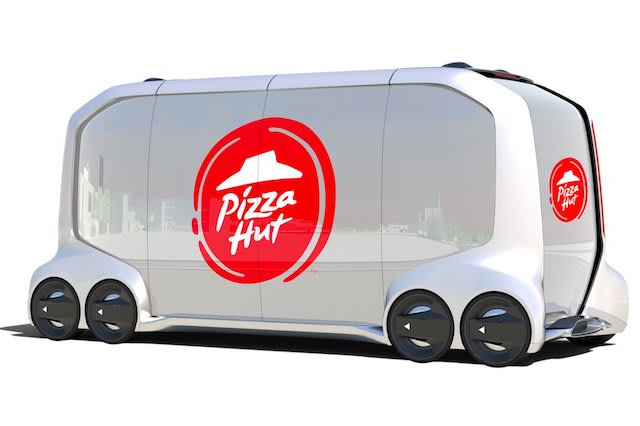 Self-driving sushi? Driverless Danish pastries? How about robotic rice noodles, or labour-saving lentils? All this could be in the future, but for now, it's only Pizza Hut sprinkling the autonomozzarella on its own product portfolio – thanks to a partnership with Toyota.

The restaurant, which cooks and delivers more pizzas than any other worldwide, has joined forces with the world's largest car brand to create a concept autonomous delivery vehicle. Named the e-Palette, it's a totally reconfigurable self-driving compartment, and Pizza Hut wants to configure it to deliver its wares – and possibly even cook them on the way.

Toyota e-Palette concept
Up Next

Artie Starrs, president of Pizza Hut in the US, said: "In our ongoing and relentless pursuit to own and define the modern pizza experience for our customers, we are focused on technology-based solutions that enable our team members and drivers to deliver even better customer experiences.

"With Toyota, we are excited to be partnering with an undisputed leader in human mobility with a reputation for innovation, reliability and efficiency, as we define the pizza delivery experience of the future."

Toyota's e-Palette forms an alliance with several businesses – including Amazon, DiDi, and Uber as well as Pizza Hut. The group will explore various applications of the autonomous e-Palette tech, with a view to refining the technology before it's put on sale.

The brand sees it not just as a pizza-delivery wagon, but a totally customisable space that can be configured as a taxi, mobile shop or even a hotel room.

The e-Palette will be tested worldwide by the early 2020s, and Toyota hopes to have it functioning for the 2020 Olympic Games in Tokyo. Don't expect your local branch of Pizza Hut to have one anytime soon, though.