One careful owner: Police pull over vehicle with no lights, wipers or windows 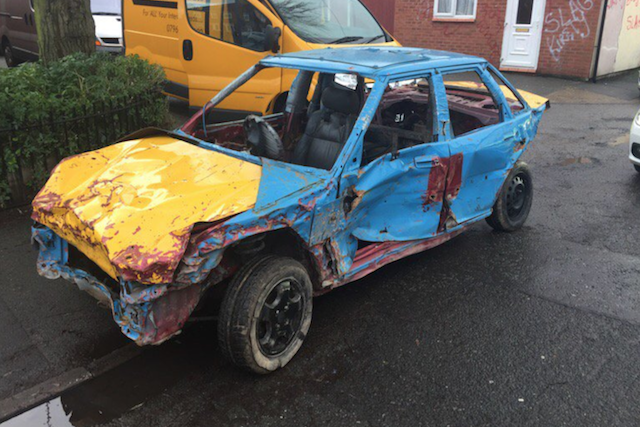 Police in Crewe are used to stopping drivers who speed, use a mobile phone while driving or don't wear their seatbelt. But Cheshire Police hit a new low, pulling over a vehicle in an almost hilariously dangerous condition – which was driving on the public road.

According to the chassis number, the car was once a Rover in red. However, it appears to have been used for banger racing, and as such is almost completely unrecognisable. The vehicle had none of its windows intact, and every single panel was dented beyond repair.

Stopped in @PoliceCrewe 😳 we kid you not!! Driver reported for having no insurance and using a vehicle in a dangerous condition!! Vehicle seized. It was once a Rover in red by the way! 🤦‍♂️👮🚓🤷🏻‍♂️ #RPU pic.twitter.com/O5CkGLEgru

It had also been repainted in blue and yellow, and lacked many of the items required for safe, legal driving – including lights, mirrors, road tax and insurance.

After police witnessed the vehicle driving on a main road and into a side street, they pulled the driver over and seized the car. The driver was also reported for having no insurance and using a vehicle in a dangerous condition.

Posting a picture of the battered vehicle on Twitter, Police wrote "Stopped in @PoliceCrewe. We kid you not!!"

Twitter users were quick to comment. One user said: "Pretty sure it left the factory looking like that. It's a [Rover] after all," while another said "I think it'll buff out with a bit of T-Cut!"

Banger racing remains legal in the UK, but the cars themselves must be trailered or transported to and from the track, as they're very far from road-legal.