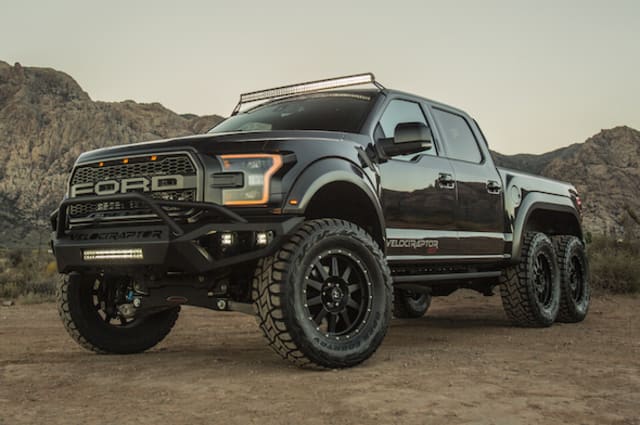 Most people will have put the finishing touches on their Christmas list, purchased the stamps and scrawled the Lapland address on the front of a pristine envelope but if you still have room, consider this.

Yes, it costs a staggering $349,000 (£260,000) but the VelociRaptor 6x6 but Texan tuners Hennessey is arguably the most aggressive pick-up truck known to man and looks perfect for this inclement weather we are currently experiencing.

Hennessey Velociraptor 6x6
Up Next

Based on a 'standard' Ford F150, which is a bit of a monster anyway, the Hennessey creation adds three locking axles, improved Fox suspension and six monster wheels that are wrapped in mighty Toyo Open Country tyres.

Under the bonnet is the same 3.5-litre 'EcoBoost' V6 engine as the F150 but here it has been treated to a turbocharger upgrade, a tweaked ECU and revised intercooler, which mean the monster truck develops 597bhp and 622lb ft.

Despite carrying over 300kg in additional features, the Texan creation manages to dispatch of the 0-60mph sprint in a very respectable 4.9 seconds.

Hennessey is no stranger to crazy performance upgrades, as it currently offers the Chevrolet ZR1 Corvette with 1,200hp and the Jeep Trackhawk with some 1,000hp.

Unfortunately (or fortunately, depending on your standpoint), just 50 VelociRaptors will be built, with very few likely to hit UK shores.