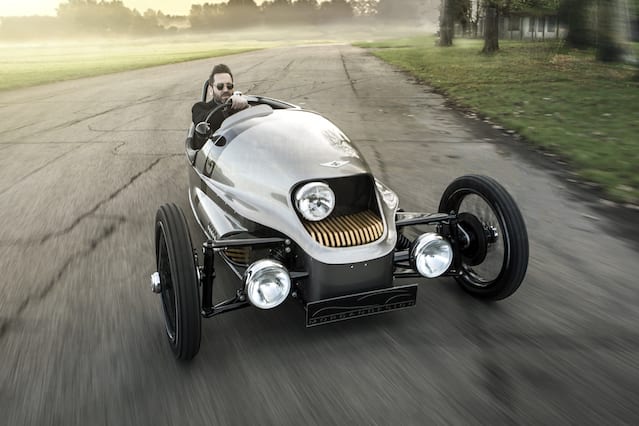 Boutique British manufacturer Morgan has announced that production of its new EV3 will begin in the latter half of 2018. An all-electric sports car, the EV3 is an intriguing mixture of thoroughly modern ideas mixed with Morgan's own old-fashioned way of doing things.

The EV3 is based on the iconic Morgan 3-Wheeler, but instead of the classic V-twin petrol engine slung between the front wheels it features a fully electric powertrain. Morgan's teamed up with electric propulsion experts Frazer-Nash Energy Systems to ensure the EV3's powertrain is road-ready.

Morgan EV3 Production to begin next year
Up Next

SEE ALSO: More than half of Brits expect to go electric within five years

As such, the EV3 will feature components 'already well-proven on road vehicles' plus fast charging technology to make ownership more convenient. Not that it's ever going to be a practical daily driver – with seating for two (just about) and no luggage space to speak of, plus a total lack of weatherproofing, the EV3 will remain a toy for high days and holidays.

The partnership with Frazer-Nash will also bring improvements over the original concept. The centre of gravity will be lower, thanks to a new battery design, and performance will be improved – with 0-60mph reportedly taking less than nine seconds.

The 21kWh battery pack should give the EV3 a range of 120 miles, while the electric motor has a peak power output of 41.8kW. That's equivalent to 56bhp – not a large figure, but the car's flyweight 500kg body should mean performance isn't lacking.

Steve Morris, managing director of Morgan, said: "We have been working closely on optimizing the EV3's architecture in every way to develop a car which will offer proven reliability range and cooling performance, combined with the pure driving experience that is expected of every hand-crafted Morgan."