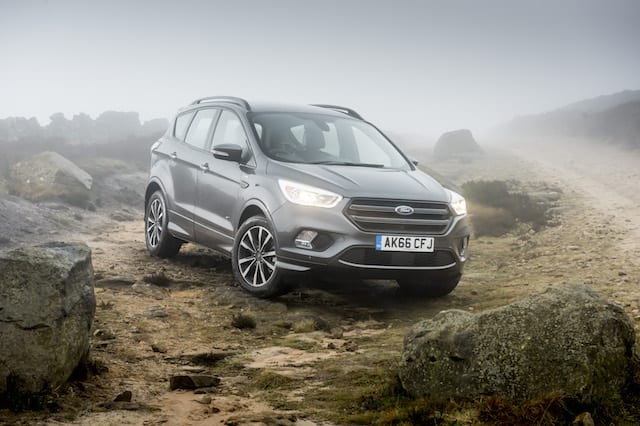 Ford has given its mid-sized SUV, the Kuga, a makeover with sporty ST-Line trim. AOL Cars gives it a try to see if this capable load-lugger works as a sportily-styled family runaround.

While the Ford Edge is the American brand's best-selling SUV on its home turf, here in the UK we have a taste for rather smaller cars – so the mid-sized Kuga is immensely popular. Here we're testing it in snazzy ST-Line X trim, with the highest-powered diesel engine and an automatic gearbox.

Ford introduced the Kuga ST-Line range in 2016, but this is the first time we've got behind the wheel in the UK. The changes that ST-Line trim brings are mostly cosmetic – our ST-Line X model features 18-inch alloys, a blacked-out front grille, and a sporty bodykit, while inside it features body-hugging seats.

Under the skin, the suspension's been stiffened up, there are thicker anti-roll bars, and the ride height's been dropped by 10mm to contribute to better handling in the corners. 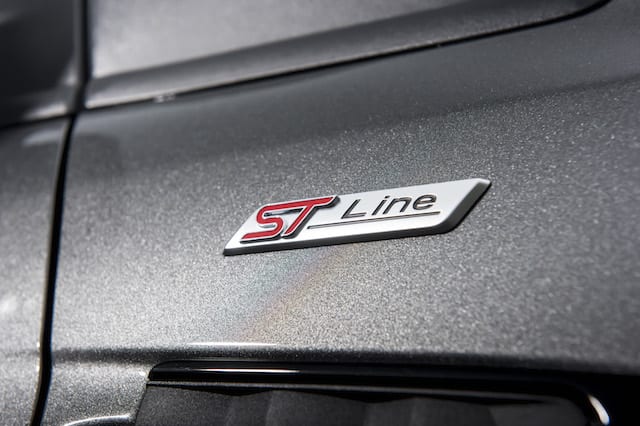 Our test car was fitted with Ford's 2.0-litre, four-cylinder diesel engine. In this guise it produces 178bhp and 400Nm of torque, and sends that through a six-speed automatic gearbox to all four wheels. It represents the top-of-the-line offering for the Kuga

Put your foot down, and despite the added power the Kuga is no speed demon – 0-60mph takes 9.8 seconds, and maximum speed is 124mph. The car's hefty weight takes the edge off any real performance. The old-fashioned six-speed 'box doesn't help either – more modern seven and eight-speed units fitted to other cars in this class do a better job of keeping their respective diesel engines in the powerband for longer.

In this guise, Ford claims the Kuga ST-Line X will achieve fuel consumption of 57.6mpg, and CO2 emissions of 134g/km. We managed 39mpg during our time with the car, based on a week of mixed driving.

Ford has a knack for making vehicles that can handle themselves better than you'd imagine. While the Kuga ST-Line isn't on the same level as the brilliant Fiesta or Focus, it's not half bad for a mid-sized SUV.

The steering is nicely weighty, and you can turn into bends with confidence – aided by the 'intelligent' all-wheel-drive system. The front does wash wide if pushed too hard, though.

The sporty ST-Line suspension is less successful. While it reduces body roll over the standard models, the trade-off for this is a harsh ride over all but the smoothest of surfaces. The optional 19-inch alloy wheels of our test car added to this, and the resulting ride isn't ideal for a car that's supposed to be comfortable family transport.

The ST-Line treatment won't appeal to all, but there's no denying it works on the Kuga. The bodykit and lowered suspension give it a more purposeful stance, while the grey and black colour scheme of our test car gives quite a low-key, powerful vibe.

The ST-Line goodies abound – including sports seats, bespoke floor mats and ST-Line illuminated sill plates – but the Kuga's interior can't be disguised from what it is: standard Ford fare.

The essentials are all there – the driving position is excellent, and there's a decent level of space for four adults and all their clobber. But layout and quality isn't up to the standards of the class, and a Seat Ateca trouces the Ford in this regard.

The centre console is a mess of climate control buttons, and the eight-inch Sync3 infotainment screen is located in an awkward recess atop the dash. While plastics higher up on the dash are of generally good quality, those lower down are particularly scratchy and hard. 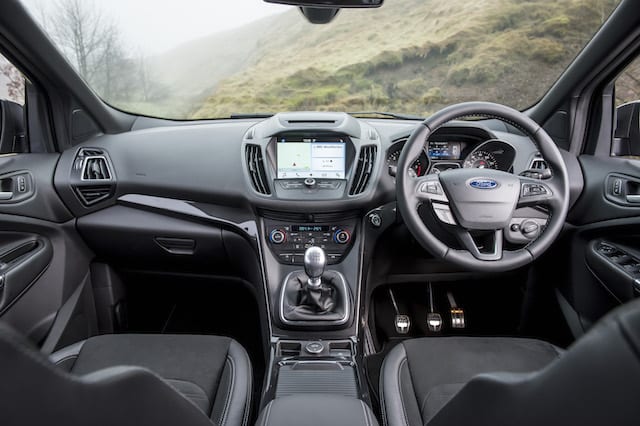 ST-Line X specification sits towards the top of the Kuga line-up, so while the price is high, standard equipment is generous. The starting price of £29,745 nets you sports suspension and sat-nav, plus 19-inch alloys, heated front seats and a hands-free tailgate.

As a family-friendly SUV, the regular Kuga has a lot going for it – but this wouldn't be our chosen specification. The lower-powered diesel engine with a manual gearbox will provide just as much performance in real terms, while lower specifications offer significantly more comfort than the sporty ST-Line trim. However, if the looks appeal, this isn't your average mundane family SUV, and the tidy handling is a real plus point.