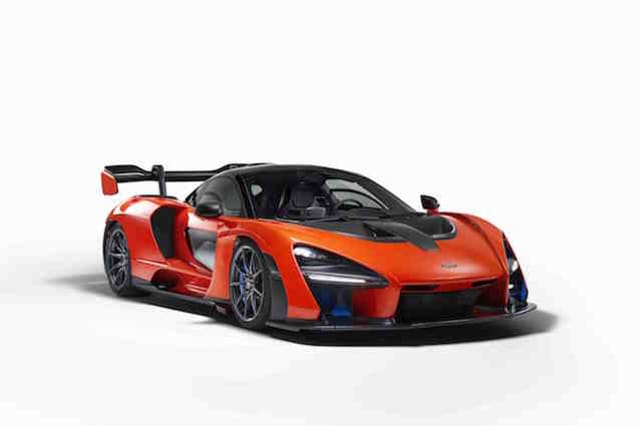 It's the 'ultimate' road-legal track car. The striking McLaren Senna, dubbed 'a car like no other', has been designed to deliver the most intense circuit experience of any vehicle the company produces.

Bearing the name of Formula 1 legend Ayrton Senna, the £750,000 supercar boasts an ultra-lightweight construction, with a carbon-fibre chassis and body panels. McLaren has also fitted it with a 4.0-litre twin-turbocharged engine, the most powerful ever created by the manufacturer, giving the Senna a huge 789bhp.

McLaren reveals 'ultimate' Senna supercar with 789bhp
Up Next

This technical recipe is classic McLaren supercar, which has been taken to another level with the Senna

And those lucky enough to afford one of the already sold out 500 models, can expect to get behind the wheel from the third quarter of 2018.

"The McLaren Senna is a car like no other: the personification of McLaren's motorsport DNA, legalised for road use but designed and developed from the outset to excel on a circuit," says McLaren chief Mike Flewitt.

"Every element of this new Ultimate Series McLaren has an uncompromised performance focus, honed to ensure the purest possible connection between driver and machine and deliver the ultimate track driving experience in the way that only a McLaren can."

Given the famous name that this new supercar bears, McLaren says its extreme performance and dynamic excellence should be no surprise. The legendary racing driver was renowned for his exceptional powers of concentration and single-minded focus on being the best on the track. And this is something McLaren wants every driver of the new Senna to experience.

Senna's nephew, Bruno, added: "Our family is extremely proud of the naming of the new Ultimate Series McLaren Senna. This is the first project that really connects with Ayrton's racing spirit and performance.

"The McLaren Senna honours my uncle because it is so utterly dedicated to delivering a circuit experience that allows a driver to be the best they can possibly be.

"There is an absolute, seamless connection between car and driver and this pure engagement, these sensory cues that a driver responds to and relies upon, ensure an experience so focused and immersive that you are left in awe of the depths of excellence the McLaren Senna possesses."