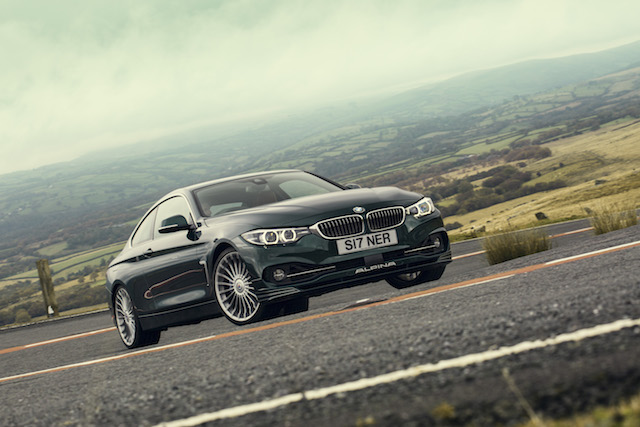 AOL cars tests the Alpina B4S, a reworked version of the BMW M4, to see how it compares with BMW's offering.

An Alpina, and we'll forgive you if you have never heard of the German tuner of BMWs before. It is an exclusive company, and it wants to stay that way.

If you're in the market for a fast and practical German coupe, you can go with the Audi RS5, Mercedes-AMG C63 or the BMW M4. Or you could go with this – the Alpina B4S, a heavily-fettled BMW M4. Packing slightly more power from its 3.0-litre turbocharged engine than the BMW M4 does, it is an understated way of going very quickly.

If you think that the B4S is just a rebadged BMW M4, you are badly mistaken. Alpina takes BMWs, strips and rebuilds them in its own unique way. The engine in the B4S remains the same 3.0-litre turbocharged power plant that sits in the M4, but it benefits from having two turbochargers, one more than the previous-generation B4 had. It now has 24bhp more horses than before, as well as improved cooling and heavily revised dampers. It is also fitted with an Akrapovic exhaust, resulting in a quality sound from the four exhaust tips.

As we've already mentioned, the B4S has a 3.0-litre turbocharged straight-six engine. It produces 434bhp and a huge 600Nm of torque. The power is sent to the rear wheels using an eight-speed ZF gearbox. It's a fantastic powertrain, delivering smooth performance and effortless torque throughout the rev range.

It's surprisingly good on fuel, too, returning claimed economy figures of 35.8mpg on the combined cycle, as well as CO2 emissions of 180g/km of CO2.

Alpina has quite a skill when it comes to cars, slotting them neatly on that thin line between being too stiff to enjoy and not being exciting enough, and the B4S is no exception.

Despite the huge 20-inch Alpina-style wheels, it still rides smoothly. Large potholes don't upset the ride much either, but it still doesn't feel too soft.

Its performance delivery is also far superior to that of the M4. The M4 feels razor sharp at all times making it quite difficult to place. The B4S feels far more relaxing to drive thanks to its effortless straight-line performance, which makes it far easier to exploit than the M4.

The steering also has a good weight and feel to it, two things that you would expect from a sports car.

UK Drive: Alpina B4S
Up Next

In a word, incredible – in our eyes anyway. While the M4 has styling that looks a bit shouty, the B4S looks far more understated, which is exactly the look that Alpina likes to go for. Our test car was finished in a stunning shade of dark green on the outside, and a tan interior on the inside. It doesn't sound like a particularly appetising combination, but in the flesh it looked incredible.

Alpina is all about subtle details, which is why the B4S also features a reserved front and rear splitter, as well as neat pin striping down both sides. The one let down was the location of the main radar housing at the front. Most cars position this behind the grille, but on the B4S it claims pride of place on the splitter and looks a little bit messy.

The B4S takes all of the components out of the M4 and improves them slightly. Our test car came with optional Merino leather upholstery, a pricey option at £1,215, especially when you consider that it comes with leather upholstery as standard anyway. It's extremely well put together and the leather trimmed dash only elevates the premium feel of the cabin.

While the B4S is a four seater and offers a good amount of rear headroom, the sloping roofline does impede on head space in the back.

A wealth of equipment comes as standard on the B4S including leather upholstery, adaptive sports suspension and a full Akrapovic exhaust system. It's strongly priced at £63,000, although unfortunately it makes do without features that really should come as standard – we were particularly shocked that you had to pay £300 to get electric mirrors.

The Alpina B4S is an excellent all-rounder, combining superb pace without the usual bone-shaking ride that you get from most sporty coupes. While some might find it a bit understated for the price, for those wanting to get places quickly without fuss, it is hard to beat.