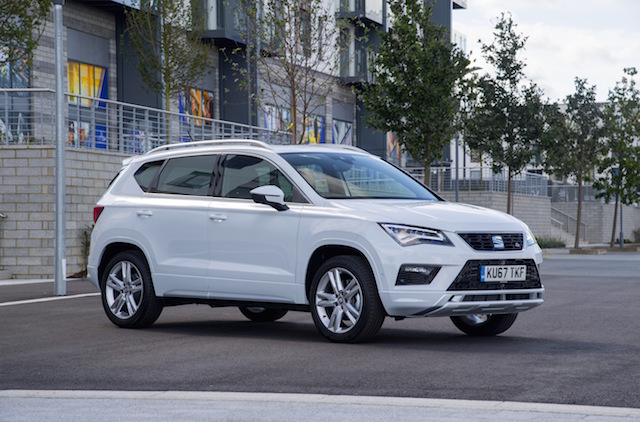 AOL Cars tries Seat's Ateca SUV in sporty FR trim to see if it's more than just a dressed-up version of the normal Ateca.

As a practical, good-looking and good-to-drive crossover, the Seat Ateca already ticks a lot of boxes for family buyers. Now, the Spanish brand has created a new grade for those who want to stand out a little more from the crowd. It's called the FR, and aims to bring a little Spanish flair and sportiness to the VW Tiguan-rivalling crossover.

Top of the upgrades list is a new engine to accompany the Ateca FR. It's a 2.0-litre turbocharged petrol, and sits at the top of the existing engine range – at least until the Ateca Cupra arrives. The exterior also gets some changes to mark it out as a sporty model – large 18-inch alloy wheels, body-coloured wheelarches and some aluminium moulding sections. The suspension's also been dropped by 15mm, while the grille is now finished in gloss black.

The 2.0-litre turbocharged petrol engine produces a decent 187bhp and 320Nm of torque. That's enough to get the bulky car from 0-60mph in 8.3 seconds and on to a top speed of 123mph. Power is sent to all four wheels via a seven-speed, dual-clutch automatic gearbox.
The 2.0 is quite a sweet engine, and despite not being the last word in performance still has plenty of poke to get you up to speed in a reasonable amount of time. It mates well with the gearbox in most circumstances, shifting crisply and swiftly, but the combo can be quite hesitant when pulling away from a dead stop.
Though speccing a comparatively high-powered petrol engine will normally see you pay at the pumps, the Ateca FR isn't too bad in this regard. Economy is pegged at 40.4mpg, while CO2 emissions are 159g/km.

The regular Ateca is already one of the nicest cars in its class to drive, with a slightly firm ride a fine sacrifice for superior roadholding and grip. The FR is no different, and in fact handles itself even better in the bends thanks to its lower ride height, sporty suspension and larger alloy wheels and tyres.
The firm ride does become even firmer, but the additions haven't ruined comfort totally, and the Ateca FR still takes on imperfections in the road surface well.
It's still no sports car, but the steering has plenty of heft to it, and it's nicely accurate. You can even take control of the gearbox via steering wheel-mounted paddles, but it's best to leave it to its own devices.

See also: The Seat Ateca leaves behind a lasting impression

The FR pack adds appeal to what was already a neatly styled and attractive crossover. Road presence is aided by the large alloys and redesigned bumpers, while our test example certainly stood out thanks to optional 'Samoa Orange' metallic paintwork. It's a £650 addition but one we'd certainly recommend – though shrinking violets can of course go for something more subtle.

The normally quite dark and dour Ateca interior has been lifted with aluminium door strips bearing the FR logo, while it also gets upgrades such as a leather-finished multifunction steering wheel and sports seats.
The latter are comfortable and supportive, and add to the car's feeling of sportiness – as does red stitching on the steering wheel and gear lever.

FR trim isn't quite top-spec – that honour goes to the auspiciously-named Xcellence – but it sits just underneath, and as such gets a lot of standard equipment. For our car's £32,820 price, you get a full media system with eight-inch colour touchscreen, Apple CarPlay and Android Auto, and sat-nav. You also benefit from full LED headlights and projectors underneath the mirror to aid ingress and egress in the dark.
A comprehensive safety equipment roster includes autonomous emergency braking with pedestrian detection, tiredness recognition and hill hold control.

Even in standard form the Ateca is already one of the best family crossovers you can buy, and is well deserving of its sales success. The FR trim only adds to this package, giving customers extra equipment and more dynamic looks for their outlay. Unfortunately, the outlay is the problem – at over £30,000, the Ateca FR is nudging some seriously premium rivals.