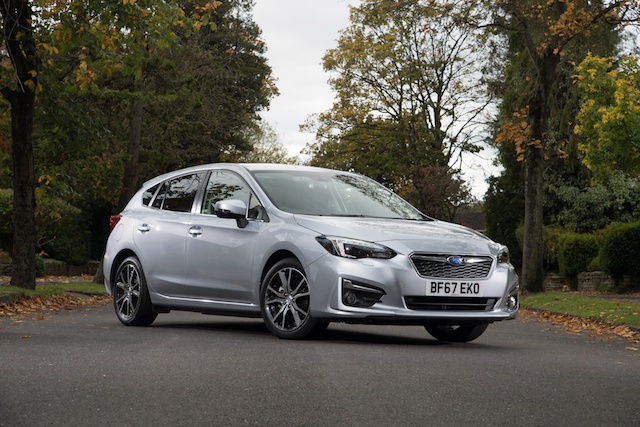 AOL Cars tests out the latest incarnation of Subaru's Impreza, to see if it's become a more mainstream choice for consumers

Subaru's Impreza dates back to 1992, and in those 25 years it's never really been a mass-market choice in the UK. With quirky 'boxer' engines, at times divisive styling and a limited dealer network, Subaru ownership is not like Ford or Vauxhall ownership.

For many drivers, the Impreza name will conjure up memories of the firebreathing, rally-bred WRX and STI models – but this new car is a rather more subdued offering. Subaru's instead aiming it at buyers who want the security of all-wheel-drive without resorting to a high-riding SUV.

Compared to the old model, almost everything. This car is new from the ground up, benefiting from scalable underpinnings that will go on to create future models. New to the Impreza range is Subaru's Eyesight system, which uses dual front-facing cameras to provide a whole host of safety features.

Under the skin, Subaru's concentrated on improving driver dynamics – a criticism of the last Impreza, though admittedly one that could not be levelled at its WRX STI sister car. The centre of gravity is low, thanks to the flat engine, the steering is quicker to react and there have been weight savings all around.

Subaru offers buyers a choice of 1.6 or 2.0-litre naturally aspirated petrols. The pressure to downsize and turbocharge appears to have escaped Subaru – as has the continued liking for diesel in Europe.

Both engines are flat-four 'Boxer' units. That has a couple of benefits – first, it keeps the centre of gravity low, but it also allows Subaru to implement its traditional 'symmetrical' all-wheel-drive system – something its regular customers are religious fans of.

Unfortunately for those hoping some rally DNA would come across in the Impreza's performance, both engines are pretty lacklustre. Without a turbocharger to add low-end grunt, the engines need working hard to generate any real pace. Strangely for flat-fours, they don't even sound very good, making it a chore to wring out the power you might need.

Rumours on the horizon of a hybrid model have not been commented on by Subaru, so for the moment we'd opt for the 2.0-litre. It's got a more usable amount of power, and mates better with the CVT gearbox.

That's right – a CVT is the only gearbox available. Is that a bad thing? Usually for keen drivers the answer is yes, but in this case Subaru's managed to create a CVT that's actually pleasant to use.

It's smooth, unobtrusive and when pressed will revert to virtual 'gears' – really just pre-engineered steps in the rev range. It also does without the droning soundtrack and artificial acceleration feel that blights similar gearboxes from other manufacturers.

As far as handling goes, the Impreza errs towards safety, which is no bad thing – it corners predictably and has almost unshakable levels of grip. You're likely to be surprised by the verve with which you can safely corner in this car.

Subaru's balanced ride combines very well with the handling on offer, and the Impreza handles potholes and speed bumps effectively without becoming roly-poly in the process. In fact, dynamically it's up there with its more mainstream rivals – it's just a shame there's no manual gearbox or peppy turbo engine to help you make the most of it.

First drive: Subaru Impreza
Up Next

Did somebody say Vauxhall Astra? The new Impreza is by no means ugly, and it does contain some neat details like sharp LED running lights and the distinctive Subaru corporate grille. But it won't stand out from any crowd – the Impreza's styling remit does not extend past 'generic family hatchback', and from a distance could be mistaken for plenty of different cars.

It's definitely an improvement over the last model, though, so we can't complain too much. If Subaru would offer the same 18-inch alloy wheels on our test car to the UK market, it would go some way to helping the Impreza shake off its dowdy image.

The interior is a place where Subaru has traditionally struggled against mainstream European brands – and while companies like Mazda, Kia and Hyundai have all shown they can make an attractive interior, that same memo doesn't seem to have hit Subaru yet.

But what the Impreza does manage very well is ergonomics – all the controls are easy to reach, and easy to use. It's also pretty roomy, with a competitive 385-litre boot and spacefor four six-foot adults.

As with the Levorg, Subaru is only bringing one of the Impreza's trim levels into the UK – the unexciting-sound SE. It is undeniably well equipped, though, particularly in terms of safety gear.

Automatic wipers and keyless entry join a reversing camera, heated from seats and full climate control, while infotainment is taken car of with an eight-inch touchscreen that happily gets Android Auto and Apple CarPlay as standard.

And that's it. Subaru won't allow you to tick any spec boxes – what you see is what you get, short of your colour and engine choice.

The previous Impreza was an underwhelming car with underwhelming sales, and despite major changes, it looks like the new model may be consigned to the same fate. It's not a bad car by any means – it's very dynamically capable, neatly styled and has seriously generous standard equipment, plus an interesting all-wheel drive system, but without some UK-centric tweaks to the powertrain, it'll continue to be a very left-field choice.