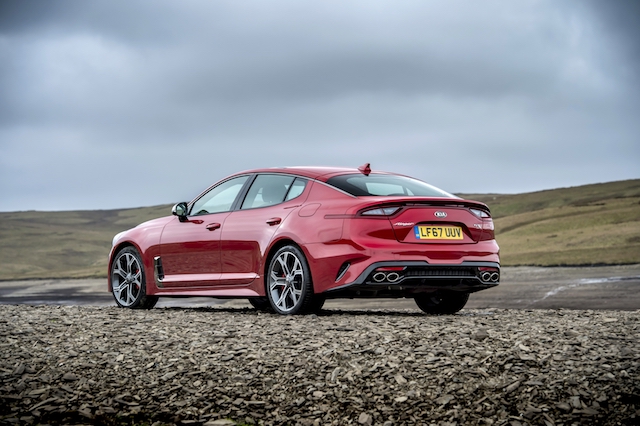 As good as the majority of Kia's new cars are, they still struggle against badge snobbery. To most people, Kia brings to mind cheap SUVs and little hatchbacks, but the South Korean manufacturer wants to change these perceptions with its new Stinger GT S performance saloon.

This Kia comes with a 3.3-litre V6 under the bonnet that produces 365bhp. It's over £40,000, too, which is well and truly in German saloon territory. It's a bold move, particularly as bosses say the Stinger is not about making money, but one Kia is willing to take to help revamp its brand image.

All of it, really. It is Kia's first attempt at a proper performance saloon, and after much deliberation over whether to bring the Stinger to the UK, it's good to see that Kia made the right decision. It has taken a whole six years for it to come to market since the Kia GT Concept was shown at the 2011 Frankfurt Motor Show, so finally it is time to drive it.

Developed under Albert Biermann, ex-boss of BMW's M Division and the mastermind behind the stonkingly good Hyundai I30N, it has a lot going for it. It also spent a lot of its time in development at the famous Nürburgring Nordschleife circuit, stacking up at least 480 laps at the circuit as well as testing in the remotest and hard-to-reach areas around the globe.

The Stinger GT S has certainly been tested incredibly thoroughly, but was it worth it?

Under that long and low bonnet of the GT S lies something you don't expect to see in a Kia – a 3.3-litre twin-turbocharged V6 petrol engine. It produces a considerable 365bhp and 510Nm, which is sent to the rear wheels via an eight-speed automatic transmission.

Unsurprisingly, it is the fastest-accelerating Kia ever produced, and is able to complete the 0-60mph sprint in just 4.7 seconds and hit a top speed of 168mph.

As for fuel economy, it manages 28.5mpg on the combined cycle and emits 225g/km of CO2.

As a first attempt at a performance saloon, you've got to doff your cab to Biermann and his team. While its engine isn't the most characterful, as a performance saloon, it's impressive. It has excellent straight-line pace and is perfect for some ultra-quick overtakes, where the law allows of course.

While the steering doesn't provide a huge amount of feel, it has a good amount of weight to it and allows you to pilot it into corners with confidence. Flick it into sport mode and it becomes a lot livelier, behaving how a performance saloon should.

Yet, stick it on a dual carriageway or motorway and it becomes a comfortable and relaxing long-distance cruiser. Kia likes to label it as a 'grand tourer' and when you drive it on both back roads and motorways, you see that it thoroughly lives up to this tag.

While looks are always subjective, we think the Stinger pulls off the fastback-look well. It is not the prettiest car in the world, but its proportions work well and the stunning swept-back roofline really adds to its visual impact.

The interior is another aspect to the Stinger where Kia has really stepped up its game. Kia has just about fully eliminated all the cheap and nasty materials from its cabin (as you would hope for a £40,000 car) and the designers have been having a good look around Mercedes interiors, as the car features air vents that look like they have been lifted straight out of the E-Class.

Interior space is impressive, too, particularly for the front-seat passengers. In the rear, headroom is limited by the Stinger's sloping roofline, but there is certainly no shortage of rear legroom. The hatchback-style boot also has plenty of space, with 406 litres of luggage capacity on offer.

At £40,495, the eyes of some badge snobs may begin to water. It's a lot of money for a Kia, but only if you think of it as a Kia from the past. You get a host of standard equipment, and of course, that 3.3-litre V6 engine.

As standard on the GT S you get an eight-inch infotainment display that has satellite navigation, a DAB radio, Apple CarPlay, Android Auto and Bluetooth. There is also heated and ventilated leather seats as well as a 15-speaker Harmon Kardon sound system.

You also get a host of safety systems including autonomous emergency braking and lane-keep assist fitted for extra peace of mind.

For a first go at a performance saloon, Kia has done a sterling job with the Stinger GT S. It has an excellent balance between being a performance car and a refined long distance cruiser. While it's hardly aggressive, it has a lot of ability and will hopefully be a sign of things to come from Kia's new performance division.