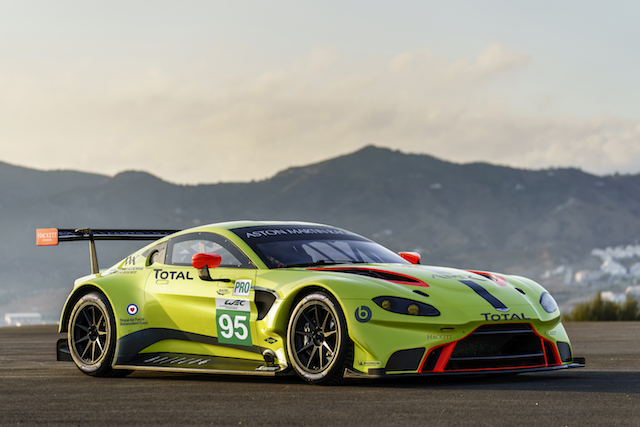 Hot on the heels of the latest Aston Martin Vantage comes this – the Vantage GTE. It's the racing sibling to the new Vantage, bristling with aerodynamic additions and set to race in the Le Mans 24 Hours and World Endurance Championship for the 2018/19 season.

The Vantage GTE has been developed from the road car by Aston Martin Racing, which altered the whole make-up of the road car to get it ready for the track. Aston Martin says that the goals of the car were reliability and ease of control on the limit, boosting its usability for so-called 'gentleman racers' in the amateur GTE-Am class.

Free from the constraints of road legality, the Vantage GTE runs on race-tuned Ohlins suspension, with bespoke slick Michelin tyres. The car's 4.0-litre turbocharged V8 engine has also been fettled to better suit the racetrack.

It's the outside where the changes are most obvious. The GTE has a vast amount of aerodynamic additions, including an enormous wing and aggressive splitters front and rear. But with the whole vehicle being given a going-over by Aston Martin Creative Officer Marek Reichman, it remains what Aston calls 'pure form and function'.

Aston Martin Racing technical director, Dan Sayers said: "Designing and developing this new car has been an extremely satisfying process. We've collaborated closely with Aston Martin's Gaydon headquarters to develop the road and race cars in parallel. Attention to detail has been a priority at every step of this process and we've made big improvements in each area of the car.

"We've spent every second optimising the design right until the build of our test car, which has paid dividends during our current testing schedule. This project has been one of the most intensive but also rewarding of my career so far".