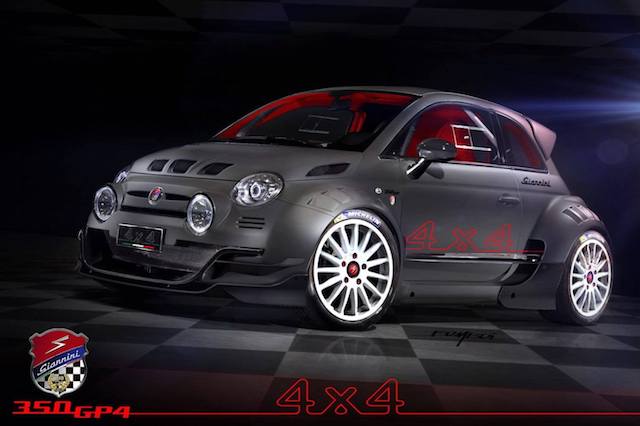 The Fiat 500 range is pretty wide – with basic, 1.2-litre models producing a measly 69bhp right up to the insane Abarth 695 Biposto, which shoves out a massive 187bhp. However, Italian aftermarket tuner Giannini has taken this up a notch with a truly insane set of modifications – producing the 350 GP4.

An evolution of the existing 350 GP, the GP4 is totally overhauled from the standard 500. The engine is taken directly from the Alfa Romeo 4C sports car, which means it's a 1.75-litre, turbocharged four-cylinder. However, Giannini has tuned it to produce a massive 345bhp.

In a car as small as the 500, that much power could be seriously difficult to manage, but Giannini has given the 350 GP4 four-wheel-drive to cope with the extra shove.

The exterior is radically different to the standard 500. Massive blistered wheel arches and enormous wheels shod in Michelin tyres are the first obvious modifications, as are the two enormous spotlights on the front bumper.

Where most 500s are covered in chrome trim, the 350 GP4 has carbon fibre abounding, with elements on the sides, mirrors, and most noticeably the front and rear splitters.