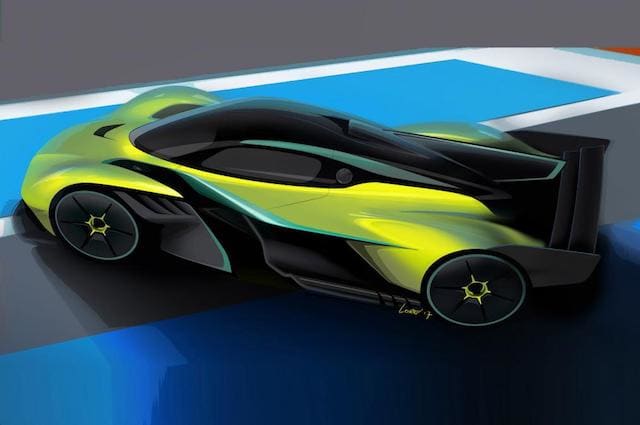 The Aston Martin Valkyrie is one of the most extreme road cars money can buy, thanks to its 1,000bhp V12 engine, super-light bodywork and F1-style downforce. Now, Aston Martin has revealed an even more hardcore, track-only variant, which it's added the AMR Pro name to.

The Valkyrie is the result of years of collaboration between Aston Martin, Red Bull Advanced Technologies and famed Formula One designer Adrian Newey. The AMR Pro version has had serious racing technology added, so while it loses its road-legal status it should be even more of a monster on track.

The exterior benefits from resurfacing, in a bid to extract even more downforce from the Valkyrie's bodywork. The front and rear wing are both larger, while the active aerodynamic systems have been tailored to track driving.

The engine has been given a boost, too - though Aston Martin won't reveal how much by – thanks to less strict emissions controls. After all, it's no longer a road car.

To that end, it's also been given Michelin racing tyres, made to the same specification as LMP1 World Endurance Championship cars. They sit outside Formula One-inspired race-spec carbon brakes.

Inside, the Valkyrie's small attempts at luxury have been removed in the pursuit of faster lap times. The heater has been removed and replaced with heating elements in the lightweight polycarbonate windscreen. The moulded race seats aren't adjustable either, while the exhaust has had its silencers removed.

Red Bull Technology's Chief Technical Officer, Adrian Newey, said: "While it is endowed with extraordinary performance, it has always been vitally important to me that the Valkyrie functions well as a true road car, and that naturally comes with some constraints. However, with the track-only Valkyrie AMR Pro we have the freedom to create an extreme evolution that makes no such concessions."

Only 25 examples of the AMR Pro Valkyrie will be built, but don't think you can get your hands on one – they've all been sold. Those lucky few can expect to see their cars delivered in 2020.