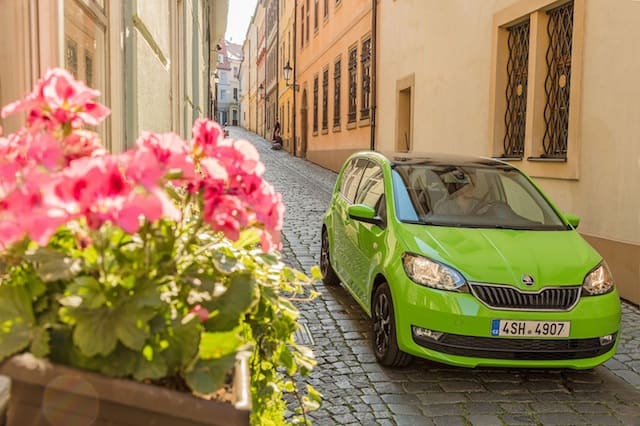 There's no shortage of great city cars on the market, with cute styling, innovative packaging solutions and rock-bottom running costs the order of the day. AOL Cars gets its hands on the latest version of the Skoda Citigo to see if it has what it takes to be a top-class town runabout.

This is Skoda's smallest car, and if it looks familiar, don't worry – it shares almost everything with its siblings from the VW Group: the Volkswagen up! and Seat's Mii. That endows it with great packaging from its square body, a choice of two naturally-aspirated three-cylinder petrol engines, and a cracker of a chassis that makes twisting back roads an absolute riot. As with any city car, it's hardly the ideal companion for longer journey, but it's a great commuter.

The Citigo's facelift didn't bring an awful lot of change. The new grille is slightly narrower and the raised lines on the bonnet slightly more pronounced, while there are also new LED daytime running lights incorporated in the headlights.

The taillights are mildly tweaked, too, while inside there's an upgraded dashboard design. Higher-spec cars now gain a small central infotainment screen and a cradle in which to mount your smartphone.

Rounding off the changes are a few new paintwork options, including a cheerful bright green that we're rather enamoured with.

Skoda Citigo first drive
Up Next

Skoda fits the Citigo with a single 1.0-litre three-cylinder engine in two states of tune – a base 59bhp or a more powerful 74bhp unit. Both are available as 'Greentech' variants, bringing economy up and CO2 down by adding stop-start and special eco tyres.

Though performance is leisurely, it's in line with the class – but it's a shame the Citigo isn't available with the more powerful turbocharged 1.0-litre you can get in the Volkswagen up!.

Even so, the engines fitted are little crackers. Packed with character thanks to a thrummy three-cylinder engine note, they rev freely up to the redline and remain impressively hushed on the motorway. They're also impressively economical, with either option averaging well over 60mpg on the combined cycle. Our 59bhp test car officially manages 64.2mpg, with CO2 emissions of 101g/km.

As you might guess from the name, the Skoda Citigo is at home in town. The buzzy engine, light and precise steering and snappy five-speed gearbox work together with excellent visibility to make this about as good as a city car can be.

Head onto a faster road and the experience isn't dulled. The suspension strikes a brilliant balance between ride and handling, and cornering in the Citigo is genuinely fun. You do need to keep the little engine on the boil though, which can become tiring and does hurt economy.

The same applies on the motorway. Though the Citigo remains pretty refined, it's not a car for really long journeys – the seats are quite flat and there's not enough power for lots of overtaking. 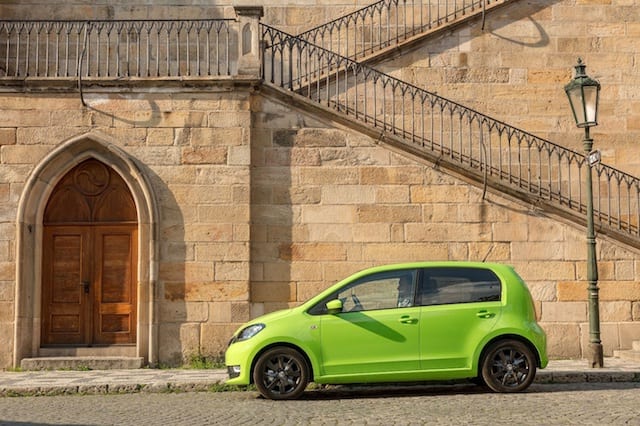 The Citigo is the mature, grown-up sibling in the VW city car trio – though if you're feeling unkind you could call it boring. Still, it's neatly styled, with the same boxy silhouette as its siblings, and the Skoda corporate grille sits well on the car's nose, aided by the facelift and its new LED daytime running lights.

At the rear, the taillights are also pretty funky, incorporating Skoda's trademark 'C' shape – though the Citigo doesn't receive the same all-glass tailgate as the Volkswagen up! does.

As good as the Skoda looks though, it doesn't have the same badge appeal or image as its Volkswagen counterpart – leading to poorer residual values. 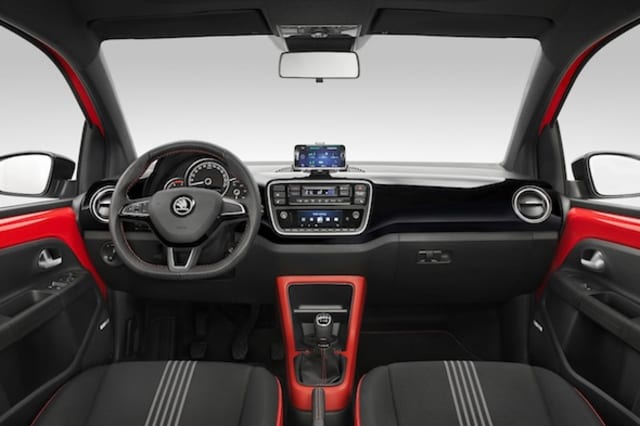 Inside, the Citigo is a mixed bag. Build quality is top-notch, and everything feels solid – but the plastics are a bit hard and cheap-feeling. A particular culprit is the steering wheel, which only gets a leather coating on top-spec SE-L cars – our Colour Edition model had a very hard and unappealing finish.

Thanks to the car's boxy shape, interior space is excellent for a package that's only 3.5m long. Four six-footers can genuinely travel in the Citigo for short distances, and the optional five-door model makes access to the back very easy. The seats are a bit flat and unsupportive, though. It's far roomier than the Toyota Aygo/Citroen C1/Peugeot 108 trio, though not quite as cavernous as the Suzuki Celerio.

The boot is impressive, with 251 litres of space. Fold the rear seats down and this increases to 959 litres, but you will need to pay extra to get a flat loading floor.

Our test car was a Colour Edition, which rather disappointingly came in white with black wheels and a black roof. Other options are available though, with a variety of wheels and roof colours to choose from. Colour Edition sits near the bottom of the trim levels, which otherwise range S, SE and SE-L, with sporty Monte Carlo trim also available.

All cars do get front electric windows and an aux-in socket, while higher up the range comes Bluetooth, electric mirrors, and even premium kit like heated seats. However, the Citigo does make do without a big touchscreen infotainment system like top-spec Kia Picantos or Toyota Aygos, though the included phone cradle works well.

The Skoda Citigo is a great little city car, and with little to separate it from its more expensive Volkswagen and Seat siblings it's an easy one to justify. Our Colour Edition does seem a bit more show than go - other trim levels make more sense. There's no denying it does give some things away to larger models – cruising comfort and interior materials to name a few – but it remains one of the best small cars to drive, and one that should definitely be on your shortlist.