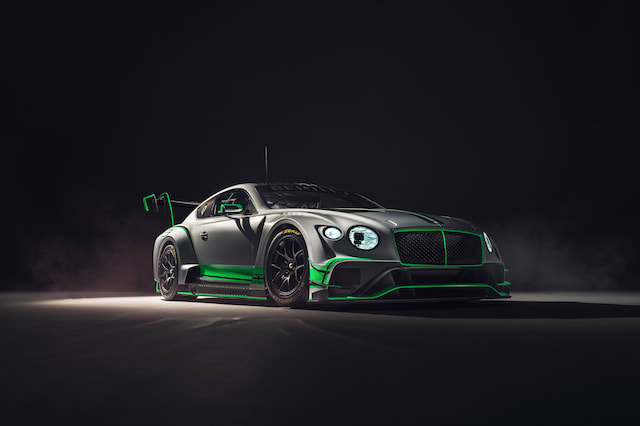 The age of the 'gentleman racer' is alive and well it seems, as Bentley has today announced its latest GT3 race car – based on the classy Continental. The second-generation Continental GT3 comes off the back of four successful years with the first-gen car, and will continue the brand's competitive efforts in endurance racing.

Bentley's motorsport heritage is long and storied, and includes iconic racers like the 4 ½ litre, Speed Six and Speed 8 Le Mans winners. The Continental GT3's first-generation predecessor itself had some considerable success, with 120 podium finishes and 45 wins across a total of 528 races worldwide.

The new Continental GT3 is, of course, based on the Continental GT road car, and takes full advantage of the vehicle's new aluminium structure. Previous Bentley racers were known for being on the porky side, but the new car weighs less than 1,300kg in race-ready form – with power from the car's 4.0-litre V8 rated at 'over 550bhp'.

Suspension and braking systems are new and totally tailored to the Continental GT3, while a six-speed sequential gearbox replaces the road car's automatic unit.

Bentley's director of motorsport, Brian Gush, said: "After four years of success with our Continental GT3, we're excited to reveal our second-generation car. The new car leaves no area or system untouched in the search for even better performance, and the early tests are promising.

"The new Continental GT road car has proved to be a great starting point for the development of a new racer, and the engineering development work is true to Bentley's impeccable standards."

The new Continental GT3 will race across Europe in the Blancpain GT Series Endurance Cup in 2018. Order books for privateer teams will open in June.