Five stars all round in latest Euro NCAP crash tests 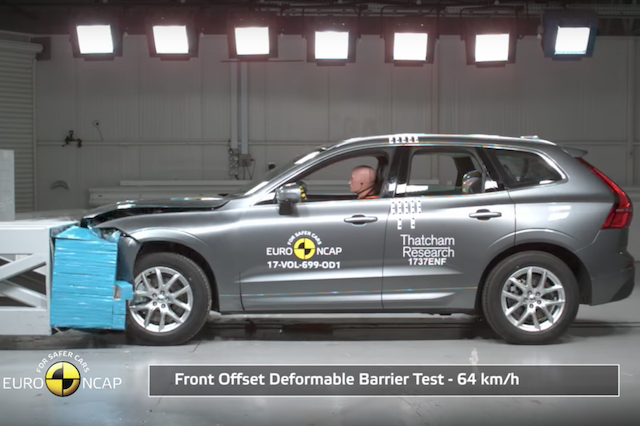 Crash testing organisation Euro NCAP has released its most recent batch of results – and it's good news for car buyers. All eight models tested received the maximum five-star rating with one, the Volvo XC60, gaining the title of "best all-round performer of 2017".

Seven of the cars were compact or mid-sized SUVs, though for Euro NCAP's purposes some were classed differently. The Volkswagen T-Roc, Skoda Karoq and Mitsubishi Eclipse Cross flew the flag for the 'small off-road' category, the Citroen C3 Aircross and Vauxhall Crossland X all joined the small MPV class while the new VW Polo and the Seat Arona were both classified as superminis. The Volvo XC60 sat as the lone large off-road entry.

All the cars, even the smallest Polo, achieved a full five-star rating – the highest Euro NCAP awards. Better still for consumers, all the cars gained this rating with their standard safety equipment fitted, unlike some previous vehicles which required expensive options to achieve top marks.

Volvo's commitment to safety shone through best, however. The company has previously said it aims for nobody to be killed or seriously injured in one of its vehicles by the year 2020, and the XC60's test score certainly backs that pledge up. A near perfect 98 per cent score in Adult Occupant protection and 95 per cent in the Safety Assist category are impressive figures indeed.

All four products from the VW Group – the Polo, T-Roc, Skoda Karoq and Seat Arona – scored very highly too, with over 93 per cent each in the Adult Occupant category.

While practicality, fuel economy and driving dynamics still play a massive part in consumers' car-buying decisions, it's always good to see that so many manufacturers are placing safety at the forefront of their priorities – and as technology like autonomous emergency braking becomes commonplace, the roads will get safer for all drivers.