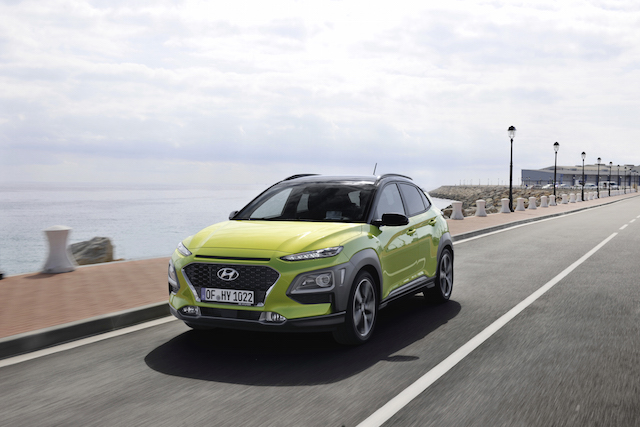 Hyundai has added a new SUV to the ever-popular crossover market. We get behind the wheel of the Kona to see how it stacks up against its rivals.

It might feel like just about every car manufacturer is entering the battle for sales in the fiercely fought B-segment SUV sector – and you'd be right. Not a day seems to pass without another car firm announcing their entrant to the market. Looking to steal the limelight for just a few days at least, is Hyundai – with the launch of the Kona, complete with funky styling and ever so slightly-too-bright paint shades.

The Kona is an entirely new model for the brand and is built on a bespoke platform. Starting at just £16,195, it comes packed with kit and clever technology, such as autonomous city braking. All models get full LED twin headlamps, two-tone roof and the choice of 10 loud colours.
What's more, the SUV is a true four wheel drive so should be able to cope with the od bump up kerbs outside schools, while it's the first Hyundai to get Display Audio, a new seven inch touchscreen multimedia system with Apple CarPlay and Android Auto.

Buyers can choose between two petrol models which include a buzzy three-cylinder 1.0-litre with 118bhp or a 1.6 GDi four-cylinder with 128bhp. Both are frugal, but if you're after performance the 1.6 makes more sense, cracking 60mph in 7.5 seconds, and it's the one we'd recommend. It returns 42mpg and emits 153g/km of CO2.
Surprisingly, Hyundai are launching the Kona without a diesel option – this will come next year with two power outputs: 113bhp and 134bhp.

Overall we found the Kona couldn't hide its SUV roots, dipping and wallowing in bends. The steering was a little vague and you'd never really be able to describe it as a driver's car. However, we liked the slick, manual six-speed gearbox – it's our preferred choice over the clumsy seven-speed auto – and the 1.6-litre GDi felt plenty powerful enough on the twisty stuff.
The suspension felt a little hard at times, though, crashing and banging over even small bumps – a particular disappointment for an SUV. Our off-roading was limited to some dusty tracks, so we can't vouch for its credentials, however it does feature locking differentials and hill-descent control.

Hyundai Kona review
Up Next

Even the boss of Hyundai UK admits the Kona won't be to everyone's tastes. However, we like it. We think it certainly stands out from the crowd – vitally important in this segment – and despite a fussy rear end, its chunky proportions and bold look are definitely loveable.
Hyundai wants the Kona to be considered as a serious SUV and not just a generic crossover so that means the styling includes lots of bold black plastics and a raised profile that not only adds ground clearance, but also road presence.

Inside, the Kona is just as interesting. You get colour co-ordinated seatbelts that match the garish exterior paint colours, there's body colour piping on the seats and matching accents on the air vents and dash. Sadly the infotainment system lets things down, it's clunky to use and froze during our test. We liked the heated and cooled leather seats (optional and included on the highest trim), and the build quality was impressive.
There is ample legroom in the front and a modest amount in the rear, although three passengers would be pushing your luck. It has 334-litres of boot space with the seats up and 1,116 with them down.

The Kona range starts with the base "S" model, which includes an impressive amount of kit, such as cruise control, LED daytime lights, all-round electric windows, a five-inch LCD infotainment screen, a DAB radio with Auxiliary and USB connectivity, as well as Bluetooth and heated electric door mirrors.
Our car was a top-spec Premium GT and boasted a full leather interior with heated and cooled seats, autonomous emergency braking, LED taillights, LED headlamps with high beam assist, and four-wheel-drive.

The Hyundai Kona is a practical car that will appeal to drivers who want to stand out from the crowd. With individual looks and plenty of kit thrown in as standard, it offers a tempting alternative to the sea of SUVs that are currently swamping the market. At £24,995 for the top spec model, it's a little more expensive than some rivals, however we'd argue the extra kit you get thrown in, and the five year warranty, certainly make it worth the extra.