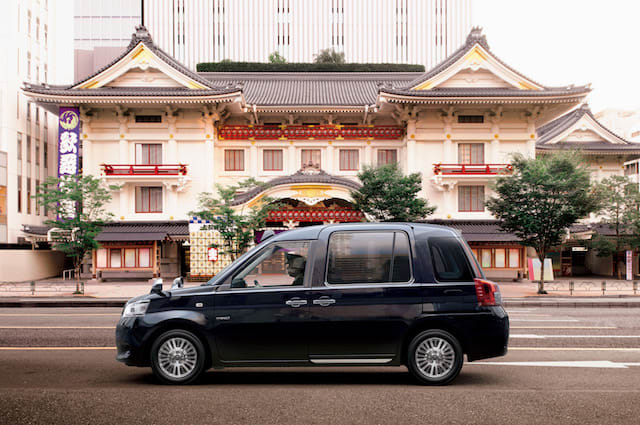 There are lots of iconic taxis around the world – Mexico City has the VW Beetle, New York the yellow cab, and London the classic black cab. For Japan, it's been the Toyota or Nissan saloon – usually kitted out with an automatic passenger door, curtains, and doilies on the seats.

Now though, Toyota has been drafted in to give the Japanese taxi a long-overdue update. Its offering is called the JPN Taxi, and apes the latest London black cab with a tall silhouette, hybrid powertrain and roomy interior.

The JPN Taxi's been designed in anticipation of the 2020 Olympic and Paralympic games in Tokyo, where Toyota felt the capital's fleet of aging vehicles conveyed the wrong image. It says that it sees the new JPN model as a way of "presenting Japan as a more accessible, tourist-oriented country, making its cities in particular places where everyone can enjoy barrier-free travel."

To that end, accessibility and comfort have been seriously stepped up compared to taxis of old. The low, flat floor and rear sliding door, allow easy entry to the spacious interior, and also allows the cab to be fully wheelchair accessible – an accolade shared with the London taxi.

Other neat passenger-focused tweaks include a navigation and fare meter easily visible from the rear seat. The interior also features LED lights and extenders to 'hand' passengers their seatbelts.

Under the skin, the JPN Taxi uses a hybrid system – combining an LPG engine with an electric motor to give claimed 55mpg fuel economy. It's painted externally in a deep indigo, named 'koiai' – a symbol of Japan, and even has mirrors mounted on the front wings for an extra retro touch.

First Drive: The new Kia Sorento is a large, handsome and practical SUV