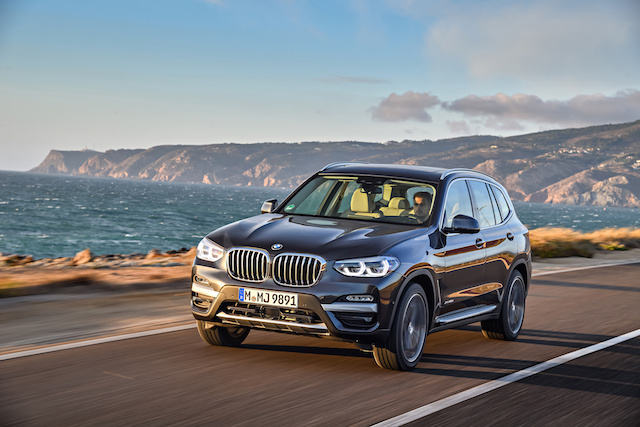 BMW has released its latest X3 SUV, and James Baggott has been to Lisbon to see what it's like.

This is BMW's mid-range X3 SAV – or Sports Activity Vehicle, if you speak corporate nonsense.

Unfairly branded a bland offering by some, it has been reworked by the manufacturer for 2018 with tweaked looks, new technology and improved refinement. But has the German firm done enough to keep buyers interested?

For a start, upgrades to the looks are relatively minor. At the front, there are new LED headlights, an active air flap for efficiency, and new fog lamps.

Round the back, you'll spot redesigned rear lights with an optional LED upgrade and twin tailpipes for all engine models. Inside, there's a smart new iDrive system, upgraded steering wheel, improved driver assistance aids and fresh materials to make it even quieter on the move.

We tested the X3 xDrive30d, which comes with a 3.0-litre twin turbo diesel engine offering 260bhp and a whopping 620Nm of torque. That lump is good for 60mph in 5.6 seconds, fuel economy of 49.6mpg and emissions of 149g/km. It's a punchy, powerful unit that feels great on the road and capable off it and will probably account for 15 per cent of sales in the UK.

A sporty X3 xDrive M40i will arrive early next year. It features a 355bhp, 3.0-litre twin turbo-charged petrol engine that makes for 60mph in 4.8 seconds and serves up 500Nm of torque. An xDrive20d will also be offered and is likely to account for 30 per cent of sales. All come with a smooth, eight- speed automatic gearbox.

Our test drive on the international launch was short and mostly off road, where the xDrive30d impressed.

It offered plenty of grip in testing conditions and hill descent control got us down some tricky inclines with little fuss. The refinement is certainly noticeable in the cabin – new acoustic glass keeps the noise down and there's little diesel clatter. It's pleasantly sporty when you want it to be, too. On the tight Portuguese countryside roads, it gripped well and was good fun for an SUV.

BMW X3 First Drive
Up Next

BMW says the looks of the X3 show off its 'power and poise', but it's easy to see why it gets some stick for being bland.

Although smart, the design is hardly challenging, and few will be able to tell it apart from its bigger and little sisters. The new rear-light design is smart, though, as are the interior improvements, which include a new steering wheel and fresh materials.

The highlight inside is the iDrive system. The refreshed layout is a joy to use, with commands by gesture, voice, touch or using the iDrive control.

It offers new connectivity with live weather updates, in-car wifi and can even share your journey information with your contacts via text message. Luggage space is good, with 550 litres with the seats up and 1,600 when you fold them down using the powered rear back-rest button. There's even a slot under the boot floor for the parcel shelf – a useful trick that we wish more manufacturers had thought of years ago.

BMW hasn't tweaked the X3 formula too much with its latest model, and with 1.5 million sales chalked up over two iterations, dramatic changes probably weren't needed. Yes, the looks might be a little boring, but it's very capable off road, great fun on it, and refined inside. Add some useful new technology and you've got a car that will help BMW keep a firm grip on the mid-sized SUV sector for some time yet.