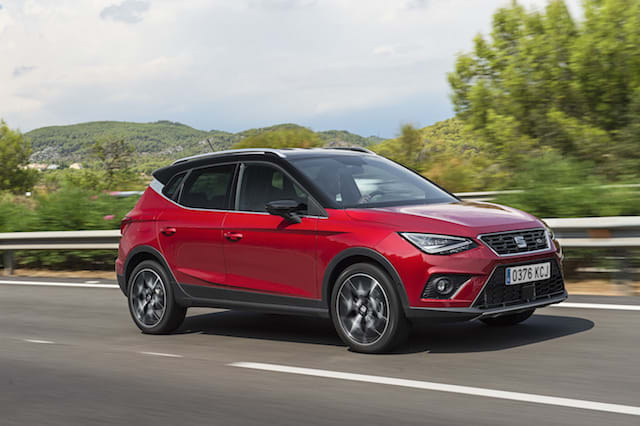 Seat has launched the new Arona to fill out its SUV range - sitting underneath the mid-sized Ateca, and forthcoming and as-yet-unnamed large SUV.

We've been to Seat's homeland, Spain, for a first drive of this stylish small crossover.

The Seat Arona is just one of what seems like a million compact crossovers launched in recent weeks. It enters a crowded marketplace popularised first by the Nissan Juke, and has plenty of competition – from cars like the Toyota C-HR and Citroen C3 Aircross, as well as within the VW Group from the Skoda Karoq and Volkswagen T-Roc.

The Arona uses the same platform that underpins the current Ibiza, and offers buyers a bit of rugged styling and a high-up seating position without compromising on compact size and ease of driving.

There's a mixture of old and new with the Arona. The exterior apes the larger Ateca, while the interior will be instantly familiar to anyone who's been in anything from the current Seat model range. That's no bad thing, as you get solid build quality and everything's easy to operate. 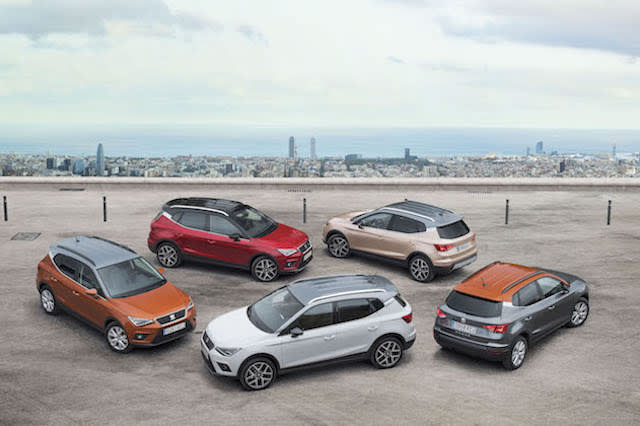 The engine range is familiar, too. It kicks off with a 1.0-litre turbocharged petrol, in two states of tune, or if you prefer diesel you can have a 1.6-litre unit that's also available with two power outputs. There's also a 1.5-litre petrol available. Depending on your engine choice, you get the option of five- or six-speed manual gearboxes, or a dual-clutch auto.

There should be an engine to suit everyone in the Arona. The range kicks off with a 94bhp 1.0-litre turbo petrol, mated to a five-speed 'box. Step up to the 114bhp version of the same engine and you can have the choice of a six-speed manual or dual-clutch automatic.

The 1.5-litre petrol is the best choice for keen drivers, and pushes out 148bhp – though it is only available in FR-spec cars.

Rogue fans of diesel, or those doing lots of motorway miles will want to consider the 1.6-litre TDI. You can have it with either 94bhp or 114bhp, and both are punchy enough even though they lose out on refinement to the petrols.

Seat Arona First Drive
Up Next

Seat's Ateca is probably the sportiest of the mainstream family crossovers, and the Spanish brand has managed to instil some of that handling prowess into the smaller Arona. The car's low weight means it's agile and eager to grip, and there's a remarkable amount of weight and feel to the steering.

Our Spanish test route took in plenty of twisty roads, showing off the Arona's proclivity for fun. There's not a lot of body roll, despite the increased ride height, but the ride is still soft and supple over inconsistent surfaces.

It's also pretty composed and stable on the motorway, surprising for a car of this size. Seat's engineered in plenty of sound deadening, too – wind and tyre noise is low, and the Arona feels like a much more high-end product than some of its rivals.

The most popular engine is likely to be the 1.0-litre petrol. It's hardly brisk – 0-60mph takes 11.4 seconds, but there's plenty of power around town, and it's relaxed at a cruise.

If you like small SUVs, we think the Arona is one of the best-looking around. The Ateca's design influence shines through, but it doesn't look awkward on the smaller car, and Seat's trademark sharp lines and bold LED headlamps look great.

Inside, the design is hardly inspiring, but it's very spec-dependent. Lower trim cars have a large slab of hard plastic on the dashboard in front of the passenger. Move up the trim levels and it's replaced by a leather-effect material, which makes a big difference.

Small SUVs are all about personalisation and customisation, so it's good that the Arona comes with nine exterior body colour choices and three different roof options. For maximum appeal, we'd go for a brighter shade. 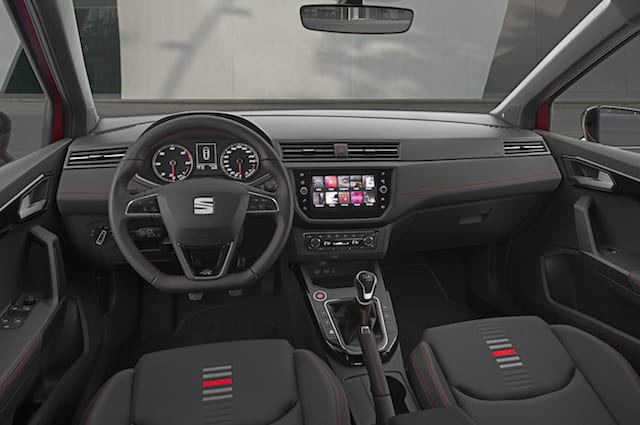 Despite the compact dimensions, Seat's managed to engineer a pretty decent amount of space out of the Arona. Those sat in the front get plenty of head and leg room, and the rear seats will accommodate six-footers with ease.

There's also a capacious 400-litre boot with a flat floor and square shape, making it easy to load.

The Arona is on offer in six trim levels. The range kicks off with SE, which brings 17-inch alloy wheels, a five-inch colour touchscreen and air-con. Step up to SE Tech and you get sat-nav and rear parking sensors.

If you want sporty, head to FR trim – it gets racy alloy wheels and a sports bodykit, while FR Sport upgrades the wheels to 18-inchers and adds dynamic chassis control.

Finally, for a bit of glamour and luxury, Xcellence and Xcellence Lux add a chrome grille, rear parking camera and plenty else besides. Prices start from £16,555, which is decent considering the generous kit on offer.

Seat is entering an incredibly crowded market with the Arona – it's been launched in the same month as competitors from Citroen, Hyundai, Kia and Volkswagen, let alone the cars currently on sale. However, Seat's created a seriously good compact SUV – the Arona is well styled, great to drive, and competitively priced. It's well worth considering.