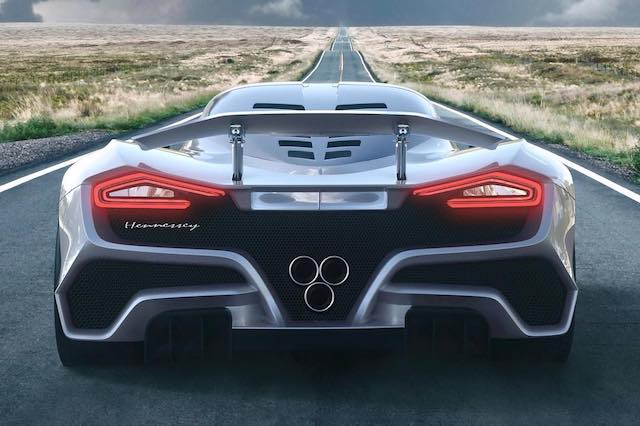 Officially, the fastest production car ever built was the Bugatti Veyron Super Sport. With a top speed of 267.9mph, it's certainly no slouch. However, less well-known is the unofficial world record holder – the Hennessey Venom GT.

The Venom GT was recorded as having a top speed of 270.5mph, but as it only achieved this in one direction it was never officially recorded as a world record. However, it seems Hennessey is coming back for another crack at the top spot, as teaser images suggest that its new Venom F5 may have a top speed of 300mph.

The images show the rear of the car, one of which is adjacent to a road sign reading 'speed limit 300'. That certainly bodes well for an attempt at the production car speed record.

Other than these telling images, Hennessey has not revealed that much information about the new Venom F5. The all-American hypercar will ride on a new platform, conforming to all current regulations to make it street-legal.

Under the hood will sit a 7.0-litre Chevrolet V8 engine, which we're expecting to produce more than 1,400bhp. The Bugatti Chiron, the Veyron's successor, pushes out 1,479bhp, but with a weight of over two tonnes it's no lightweight. We're expecting the featherweight Venom F5 to soundly bash the Bugatti on power-to-weight ratio.

Bugatti claims the Chiron's top speed is around 290mph, but it's limited by tyre technology – the company claims there are no tyres capable of withstanding such speeds while also surviving everyday use. How Hennessey intends to beat this hurdle, we've yet to find out, but it's set to be a fascinating showdown.

The American company is set to unveil the Venom F5 on November 1 and we'll give you all the details from the launch.