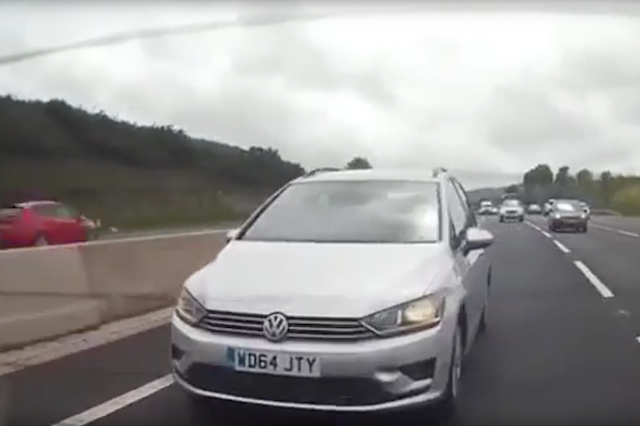 A road-rage driver has been caught on camera brake checking a motorist, causing traffic to go from 70mph to just 22mph on the motorway.

The footage captured on the Devon Expressway near Kennford on to the M5, shows a car travelling in lane three as it overtakes other vehicles. The rear-dash cam shows a silver Volkswagen Golf Plus tailgating the motorists before aggressively overtaking.

As the Golf passes it can be seen swerving across the front of the dash cam car and braking very hard. The traffic slows from 70mph down to 22mph, causing a very dangerous scenario.

Other drivers can be seen putting their hazard lights on and a van driver seems to get very angry with the Golf, driving alongside it for a while after swerving to avoid the sudden braking.

According to the Daily Mail, the driver of the Golf, Jay Lee Lashbrook, 24 from Brixington near Exmouth, pleaded guilty to one charge of driving dangerously in lane two of a three lane carriageway.

At Exeter Magistrates court, Lashbrook was handed a ban from driving for 12 months and a fine of £365.