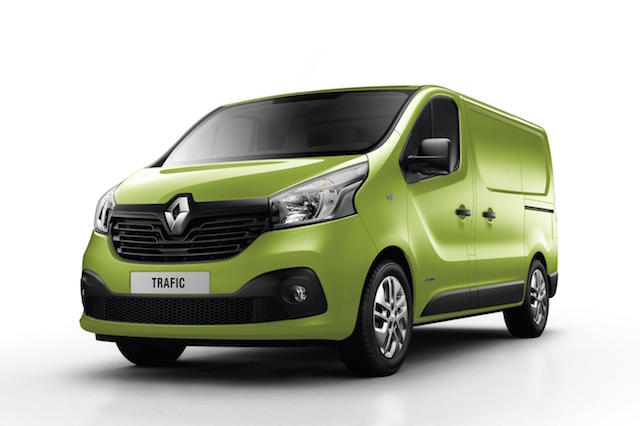 In need of a new mid-sized van? AOL Cars tries the latest Trafic to see if it's worthy of your cash.

Renault is one of Europe's biggest sellers of light commercial vehicles and the Trafic is its entry into the popular mid-sized panel van sector. With strong competition from Ford's trusty Transit and many others, it has a lot of fierce rivals.

As the Trafic shares its platform with the Vauxhall Vivaro, Nissan NV300 and Fiat Talento, it has to do a lot to stand out.

There isn't a huge amount you can do to the styling of a van, so while it might look all-new, it is actually a heavy revision of the big-selling second-generation Renault Trafic.

The Trafic comes equipped with Renault's efficient range of diesel engines that sit behind its distinctive front end. Inside, the Trafic benefits from sharing common fittings with Renault cars, leaving you with a very car-like and easy-to-use cabin.

The Trafic can be had with two load lengths and two roof heights, split rear doors or a tailgate and two load volumes. It can also be specified as either a crew cab or as a nine-seater minibus.

All engines are based on the 1.6-litre dCi four-cylinder diesel. At the bottom end is the dCi95, which is best avoided because of its gutless performance if you're carrying anything other than ultra-light loads.

The best bet is the dCi 125 which has 123bhp and plenty of torque. It's not going to win any speed records, but it felt easily capable even with a full load. There is also a dCi 145 with 143bhp.

Our dCi 125 version had no trouble averaging 44mpg, and when you combine that with its 80-litre tank, a 700 mile range seems easily achievable on one tank.

The Trafic has a surprisingly comfortable ride, and despite the obvious three-seat set up and high ride height, it feels remarkably car-like.

Heavy body roll comes as no surprise but it settles well to relaxed driving with well-weighted steering and controls that fall easily to hand helping you feel comfortable even on long journeys.

Renault Trafic van review
Up Next

The Trafic is typical van fare, although our Sport version came with 17-inch alloy wheels and was finished in an unmissable shade of Bamboo green, although for those wanting to blend in, more classic colours are available.

The Trafic is a bit more recognisable up front, though, with typical Renault design language the French maker uses on its cars. A gloss black grille, sharp headlights and the Renault diamond give the Trafic an unmistakable face.

Inside the Trafic is very car-like thanks to a dash that has been lifted straight from the Clio hatch. On top-end models, it features an R-Link touchscreen system that is slick and great to use, if positioned in a slightly hard-to-reach place.

The driving position is comfortable, too, with a well-positioned armrest and lots of adjustment in the front seat. In the back there is a huge load area that is flexible to access thanks to its low loading height. It's ply-lined too and all versions can fit a Euro pallet in the back.

Equipment levels are generous on the Trafic. Our Sport model came as standard with satellite navigation, automatic lights and wipers, cruise control and climate control. On the exterior, it had 17-inch alloy wheels, metallic paint, body-coloured door mirrors and front fog lights, too.

While models further down do not have all these luxuries, every model comes with Bluetooth, a DAB radio, aux and USB plug-in, electric windows, remote locking and a full steel bulkhead.

While the Transit is the 'go to' choice in the van world, the Trafic represents an eye-catching and cost-effective alternative in the mid-size panel van market. It's not perfect, but the combination of great engines and a comfortable ride make it a great companion. Even better, if you don't like the look of a Renault badge, you can always have the Vauxhall, Nissan or Fiat versions instead.