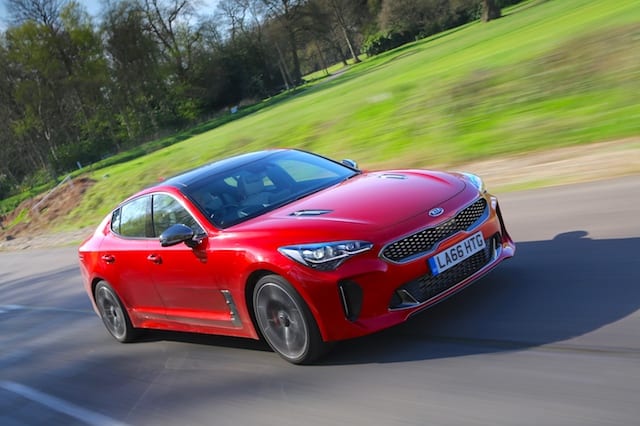 Think of a rear-wheel drive car with sleek styling, a V6 engine and handling tuned by former BMW M Boss Albert Biermann, and probably the last manufacturer that comes to your mind is Kia.

But the new Stinger could turn your preconceptions of the South Korean manufacturer on their head – and the brand has just announced prices and specs for the car in the UK.

Also available is a 2.2-litre diesel, which packs 197bhp and 440Nm of torque. That's good for 0-60mph in 7.3 seconds, but on the flip side, will return over 50mpg if driven carefully. Kia suspects this CRDi diesel will be the biggest seller in the UK.

The flagship car will cost from £40,495 – more than any Kia that's gone before. To compensate for that hefty price tag Kia has equipped the range-topping GT-S with a 3.3-litre V6 engine, which produces 365bhp. Claimed performance figures are an impressive 4.7-second 0-60mph time, and a top speed of 168mph. Economy is less impressive though, with 28.5mpg claimed.

Highlighting Kia's commitment to making the Stinger a truly dynamic option, the GT-S also gets plenty of performance upgrades. Brembo brakes and adjustable electronic suspension feature, as does a limited-slip differential that's common across the whole range.

The new Stinger project has been overseen by Albert Biermann, the same man who is responsible for Hyundai's i30 N. Formerly head of BMW's M division, his influence could be the deciding factor in the Stinger's sales success.