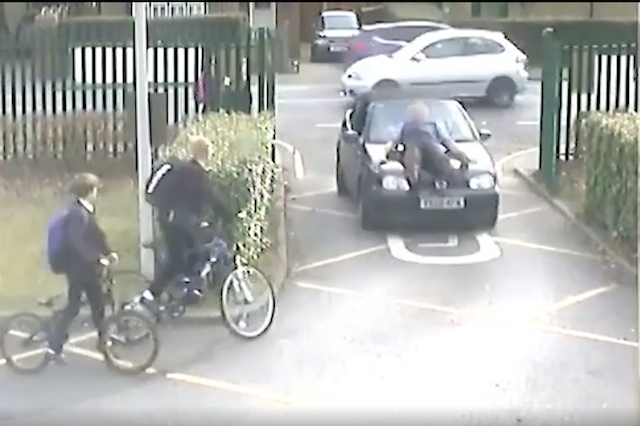 The school run is known for being a bit of a free-for-all, but one parent in Surrey took that somewhat literally when he drove his car directly at a teacher. Surrey Police has released CCTV footage of the shocking incident, which it says is not "the behaviour expected of drivers".

The man behind the wheel, 22-year-old Rainer Schoeman, attempted to pick up a child at 3pm. He was blocked from entering the gates of the Winston Churchill school in Woking by a teacher.

The teacher, who was not named, spoke to Schoeman before standing across the school gates with his back to the car.

Schoeman then put his foot down, accelerating towards the teacher and throwing him across the car's bonnet. He then continued through the car park at speed, narrowly missing children as he did.

Schoeman has been jailed for 10 months following the incident, having pleaded guilty to causing actual bodily harm, dangerous driving, driving without insurance and having no MOT.

PC Andrew Searle from the Roads Policing Unit said: "It is clearly no way to behave in front of children at a school, firstly with their safety in mind but also it sets an incredibly poor example.

"We all know that school car parking situations are a frustration for many people around the country, however if you cross the line there is every chance you can go to prison as Rainer Schoeman has done."