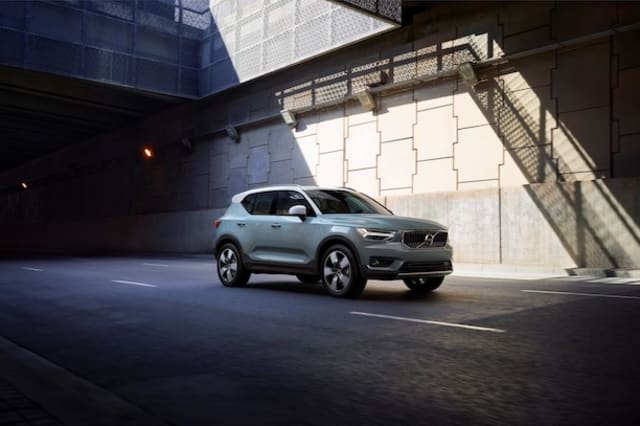 The Mercedes GLA, the Audi Q2, the BMW X1. What's missing? Up until now, it's been Volvo, which has lacked a stylish compact crossover. Now, though, the Swedish brand has launched its new XC40, and it's set to take on the German brands at the premium compact SUV game.

Volvo calls the XC40 an 'urban SUV', and features a lot of the tech you'd find on the brand's bigger offerings – the XC60 and XC90. It takes its design from those cars too, featuring both Volvo's trademark upright grille and the styling 'Thor's Hammer' daytime running lights. Round the back, C-shaped rear lights are also a homage to the larger cars, but the car's overall shape is much sleeker.

Inside is the same mix of Volvo styling features and interesting touches. The vertical infotainment screen and uncluttered dashboard will be familiar, but a rather arresting optional orange colour scheme lends a youthful touch to proceedings.

Further appealing to younger buyers is Volvo's revolutionary new ownership scheme. It's called 'Care by Volvo' and acts like a phone contract – one flat monthly fee covers the car, insurance, tax and servicing. Customers also get a brand-new car every 24 months.

So far, Care by Volvo is only available to customers within the M25, though the company has plans to expand this. T5 petrol and D4 diesel models will be available initially, costing from £629 a month.

As for engines, there's currently five to choose from. The range kicks off with a T3 154bhp petrol, which is upgraded to 187bhp and 247bhp in T4 and T5 states of tune. Diesel models are badged D3 and D4 and come with 148bhp or 187bhp. Depending on your choice of engine, you can have front or all-wheel drive, and automatic or manual gearboxes.

New Volvo XC40 revealed
Up Next