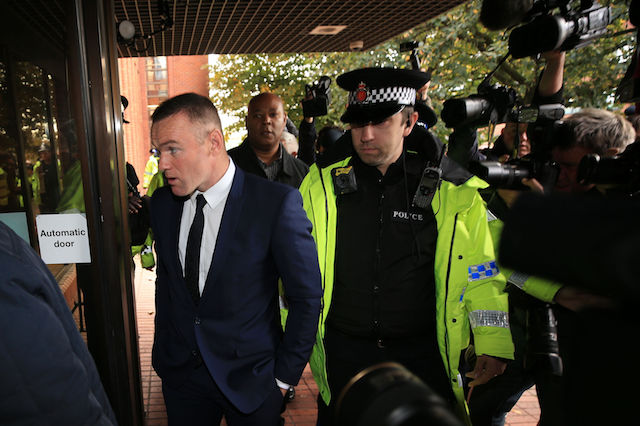 Rooney was arrested on at 2am on September 1 in the town of Wilmslow, Cheshire. When tested, he had 104 micrograms of alcohol in 100 millilitres of breath. The legal drink-drive limit is 35 micrograms.

The 31-year-old footballer has lost his licence for two years and was ordered by Stockport magistrates to perform 100 hours of unpaid work over a 12-month community order. He was also ordered to pay £170 in prosecution costs and a victim surcharge, though that's unlikely to worry his estimated £100 million net worth.

Rooney has issued a public statement regarding the incident, publicly apologising for his "unforgivable lack of judgement".

He continued, saying: "It was completely wrong... I want to apologise to all the fans and everyone else who has followed and supported me throughout my career.

"Of course I accept the sentence of the court and hope that I can make some amends through my community service."

The court heard Rooney's legal team had asked the judge to consider not imposing a community order, citing the footballer's ongoing charity work. However, District Judge John Temperley said he was "not convinced" that a large fine would have such an effect on the footballer.

He continued: "This is a serious matter... you placed yourself and other road users at risk as a result of your poor judgement that night.

"I accept your remorse is genuine and that you are aware of the adverse effects the events of that night have had, not least on your family."