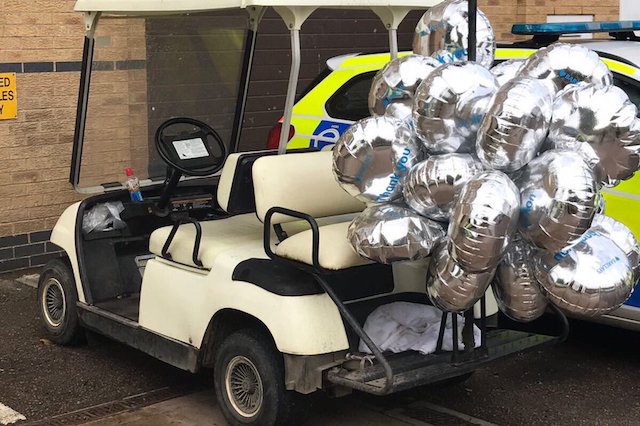 For one drunken party-goer this week, taking a taxi to get food was simply out of the question. Instead, the boozed-up man decided the best course of action was to steal a golf buggy and head to a McDonald's – 15 miles away.

Police apprehended the man around 4am, after he'd been travelling for almost an hour. The buggy, which had been stolen from a golf club in Towcester, Northamptonshire, has a top speed of around 14mph and was found covered in balloons. Commenters on Twitter were quick to enquire if the man had blown them all up himself.

One of the team seized this last night.Driver stole it, stopped off at McDonalds, drove many miles. When stopped blew over drink drive limit pic.twitter.com/LlJBBdQ6DB

When apprehended, the man was arrested on suspicion of theft and drink driving, and when tested blew almost twice the legal drink-drive limit. He had been travelling down the A45 in Daventry.

Northamptonshire police officers posted a photo of the golf buggy on Twitter, with the caption: "One of the team seized this last night. Driver stole it, stopped off at McDonalds, drove many miles."

Other Twitter commenters were quick to get in on the act, with one commenting about a similar scenario: "... reminds me of a call at 2am from one of our team enroute home 'I'm following a golf cart at 5mph with 4 drunk guys in tuxedos'"

The drink-driver has not yet been named, but remains in custody. The penalty for theft and drink-driving is very likely to result in him being disqualified from driving – but at least he can't possibly be charged for speeding.