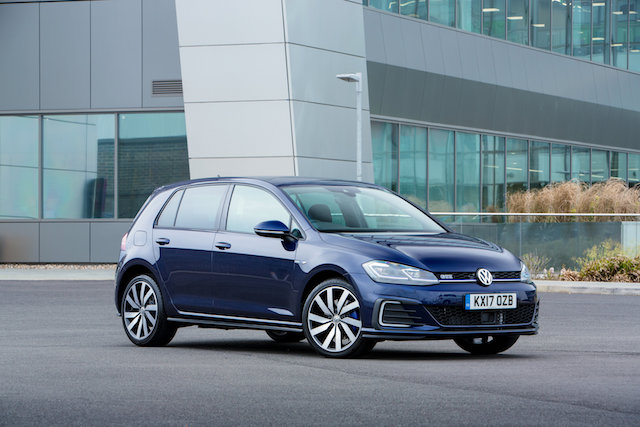 The Volkswagen GTE promises to be a sporty hatch with family practicality and hybrid low-emissions. We see if it can deliver.

The Golf GTE is a plug-in hybrid that is designed to rival the likes of BMW's i3 Range Extender. It's an eco-friendly car that has a claimed 156mpg and retains all the practicality of a standard Golf, with some performance thrown in too.

Unlike a Golf GTI, the GTE uses a hybrid set-up, with power going through to the front wheels – 201bhp to be precise.

There is also 350Nm of torque available through a six-speed dual-clutch automatic gearbox.

For those doing lengthy journeys, the GTE theoretically makes sense, having a 580-mile range with both electricity and petrol power combined.

WHAT'S UNDER THE BONNET?

The Golf GTE uses a 1.4-litre petrol unit mated to an electric motor. As a result it can travel from a standstill to 60mph in 7.4 seconds and go on to a top speed of 138mph.

This fuel saving technology also results in an average claimed economy of 156.9mpg, and it emits just 40g/km CO2 in this higher-spec Advance version. Figures are slightly lower at 39g/km CO2 in the standard GTE. To charge the car fully takes 3h 45m from empty

When VW slaps a GT badge on a car you can expect it to look and feel sporty. And this is mostly true with the GTE, which has sharp steering. But there is a drawback and that is how weighty the car actually is. Thanks to those lithium-ion batteries, the GTE weighs in at a hefty 1,615kg unladen – more than 300kg over the GTI. That's a lot and you definitely feel it under acceleration and when pushing the car through a bend.

Put the GTE in all-electric mode, and it can each up to 81mph, although if you do this the electric power will drain very quickly. Push the GTE button and the performance dramatically changes as both the petrol and electric motors combine for maximum power output.

However, even using this mode doesn't transform the GTE into a B-road bruiser – the 1.4-litre engine doesn't have quite enough character to it, while the gearshift can be a little sluggish in full auto mode.

HOW DOES IT LOOK?

The GTE is a very sporty looking hatchback from just about every angle – you could even be forgiven for thinking it was a GTI. Look closer though and you'll note the horseshoe-shaped LED daytime lights that are a tell-tale sign this is in fact a GTE. You also get blue accenting on the front grille as apposed to the red of the GTI. Sharp LED headlamps and angular styling cues along with chromed wheels make it stand out from the crowd.

The GTE is very similar to the GTI on the inside – it even has tartan seats. However these ones are blue rather than racy red as blue denotes electric or hybrid vehicles for Volkswagen. Everything also feels solidly made with lovely-to-operate switches and a very luxurious feeling steering wheel. Delve further though and you will find a few scratchy plastics that aren't as nice as others you'll find in the rest of the cabin.

There's plenty of headroom and legroom in the front, but the rear is slightly compromised, especially if you have a taller driver. The boot is okay but not as good as a standard Golf. Thanks to those batteries under the floor, they eat away more than 100 litres of boot space.

The GTE comes with a good amount of kit as standard. Our Advance-spec car came with Volkswagen's newest Discover Navigation infotainment system, heated front seats and 18-inch wheels. The satellite navigation is also in-built with the ability to identify potential destinations within the car's all-electric range, as well as charging points nearby. In addition, you get DAB radio and as Bluetooth connectivity.

The GTE costs from £29,635 inclusive of the government's £2,500 grant.
However, our Advance-spec car came in a little higher at £31,485 including the
grant – thanks to a couple of optional extras that included LED headlights and a rear-view camera.

The Volkswagen GTE is a mixed car. It isn't sporty enough to be a hot hatch, but has good looks and economy on its side. If you want a car that fully engages you when you drive, though, you might want to consider something else. Overall though it's a sporty, practical family hatchback that will impress on economy and feels solidly made, and therefore hopefully reliable.