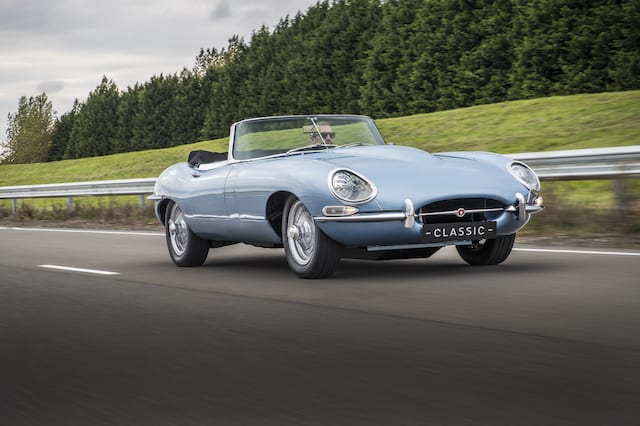 Classic cars are often very beautiful to look at, but living with them is a different story – 50-year old engines often don't mix very well with modern traffic. But Jaguar Classic may have the answer, and has produced a version of its iconic E-type roadster with a fully electric powertrain.

The E-type Zero, as Jaguar calls it, is the product of the company's new 'Classic Works' division, based in Warwickshire. It's fitted with a powerful 295bhp electric motor, giving it improved performance over the original model. Zero-62mph takes just 5.5 seconds – a second quicker than the '60s original.

The new car's battery pack sits where the engine would on the original car, and according to Jaguar takes up no extra room. The British manufacturer also claims the car handles, rides and brakes just like an original car. It's also said to be capable of 170 miles between charges.

The exterior is pretty much unchanged, though obviously it has a plug socket rather than a petrol cap. LED headlights also feature. The interior has had a serious makeover, though.

Old-school dials and gauges make way for a fully digital instrument cluster, large central touchscreen and rotary gear selector. It's undoubtedly more user-friendly, especially with the sophisticated electric powertrain, but it seems to have lost some of the original car's charm.

Jaguar Classic says that the newly developed electric powertrain isn't just suitable for the E-type. In fact, it claims it could be fitted to almost any Jaguar from the same period – including the XK120, Mk2 and XJ6.

The E-type Zero will go on show at Jaguar Land Rover's Tech Fest event in London from 8-10 September, alongside the I-Pace SUV – Jaguar's other all-electric concept car, which will see production in 2018.

Fully-electric Jaguar E-type Zero
Up Next