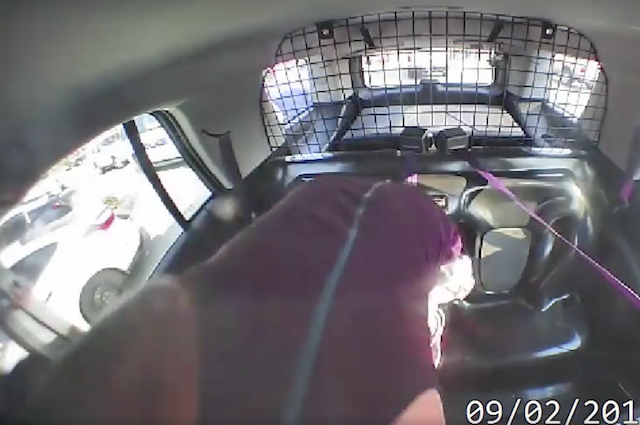 An incredible piece of in-car footage shows the moment a Texas woman placed under arrest not only manages to escape her handcuffs, but lead police on a daring 100mph chase – in the car police arrested her in. The Lufkin Police Department released the footage, which comprises a highlight reel of the event.

According to the spokesperson for Lufkin PD, Sponsler was arrested as officers responded to a report of a possible shoplifting. She was taken into custody and driven a short distance away. Officers exited the car to search her belongings, and it was at this point she made her escape – first slipping out of her cuffs, and then climbing the car's partition to take control of it.

Once she had control of the car, Sponsler drove off, almost hitting an officer in the process. She then led officers on a 23-minute chase, reaching speeds of up to 100mph, before police eventually used the PIT manoeuvre on the car causing it to collide with a tree. The Chevrolet Tahoe cruiser was said to be a total write-off.

Sponsler was found to be in possession of methamphetamine after her arrest, and will be charged with that offence as well as serious bodily injury, threat of a deadly weapon, aggravated assault, evading arrest with a vehicle and unauthorised use of a vehicle.
Lufkin PD is taking steps to prevent situations happening in the future, namely by limiting the size of the partition window in their police cruisers.